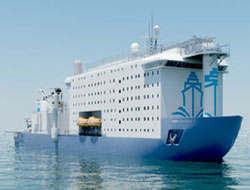 A&P Tyne Ltd announced that they have been awarded a contract to carry out conversion work of a former ice breaking naval vessel into a DP3 Flotel, accommodation vessel carrying up to 399 persons.

Ice-class flotel will be completed by A&P Tyne.

A&P Tyne Ltd announced that they have been awarded a contract to carry out conversion work of a former ice breaking naval vessel into a DP3 Flotel, accommodation vessel carrying up to 399 persons.

The contract has been awarded by the C&M Group of Aberdeen. Some work on the vessel has already taken place at Atlantic Marine Shipyard in Mobile, Alabama in the USA .

The vessel is due to be brought to the Tyne by the heavy lift cargo vessel Fairstar Fjord where the main part of the conversion will be undertaken.

The company described the project as challenging project and typical of the complex marine conversions carried out by A&P Tyne over recent years.

The project will require the fitting of some 1400 tonnes of new accommodation block steel work, accommodation for 399 people which include all the necessary services to support the personnel to be carried.

There will be a further 1900 tonnes of steel work fabricated and fitted to form new decks and machinery spaces. 8 new generating sets will be fitted to power 8 new thrusters giving the vessel full DP3 dynamic positioning capability.

An interesting design feature is the fact that the vessel will be the first of her type to be fully Ice Classed and will be capable of operating in conditions of minus 40 deg Celsius.

Appropriately, the vessel (ex PAARDEBERG, ex OUTENIQUA) has been renamed ICE MAIDEN I.

The contract will take 9 months to execute from the time of arrival at the yard and is worth in excess of £30 million pounds.

This news is a total 2057 time has been read