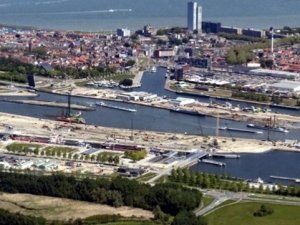 North Sea Port, the cross-border port area that spans the North Sea coast in the Netherlands and Belgium, reported as expected sharp declines in cargo transshipment as the impact of the coronavirus grew during the second quarter.

Historically Europe’s eight largest port operation, it normally is a center for transshipment into Europe.According to data released by the port, the coronavirus’s impact on trade and the global economy halted its previous steady growth and severely impacted cargo transshipments. However, the cross-border port is looking forward to a slight recovery in cargo traffic by sea and on the inland waterways towards the end of the year. North Sea Port reported an 11.5 percent decline in cargo transshipments during the first half of 2020. A total of 32.4 million tons of cargo moved through the port in 2020 with the strong declines in the second quarter. A total of 15.6 million tons moved through the port during the second quarter down more than 16 percent versus the prior year.Containers were the one sector that was not impacted growing by more than 5 percent. North Sea Port said that it continues to see growth in container volumes as it has been able to attract new services to the port.The port, however, reported strong declines in bulk goods. Liquid bulk fell by more than 17 percent while dry bulk was down by 7 percent. Declines in Europe’s automotive sector resulted in a decline of 29 percent decline in ro-ro volume in the port while breakbulk decreased by 13 percent.North Sea Port also serves as a hub for inland navigation. Inland volumes reported similar declines with cargo tonnage down 5 percent to a total of 28 million tons in the first six months of this year. The port had experienced growth for inland navigation in the first three months but a 14 percent decline during the second quarter.Commenting on the volumes, the port said the losses were in the same sectors as in maritime shipping and that this is a natural consequence of North Sea Port being a transshipment center between seaborne and inland shipping.

This news is a total 1784 time has been read
Tags: North Sea Port Reports Strong Declines in Seabourne and Inland Volumes