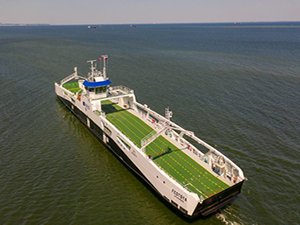 Norway’s electric ferries take a step forward in technology with each new design, as the latest deliveries to Norled show. In April, the aluminium Westcon-built Hjellestad started ferrying up to 16 cars or two trucks and 77 passengers on a short route to and from an island outside Bergen. And it does so in a more economical way than its predecessors by virtue of several refinements. Read more:www.deha24.com

Also in summer, Norled took delivery from Remontowa Shipbuilding of two bigger, all-steel sister ships, 114.4-m long and 17.7-m wide Festoya and Solavagen, both with capacity for 120 cars and 295 passengers. These vessels are equipped with batteries and biodiesel-burning generator sets.

“In normal operation they will run in full electric mode but that is not available currently because the shore-based charging infrastructure is not ready,” Remontowa commercial director Michal Jaguszewski tells Passenger Ship Technology. Two similar [or sister ships] vessels will follow from Remontowa in late 2020 and early 2021.

Although Hjellestad looks outwardly similar to the earlier battery-powered ferries such as the pioneering Ampere launched in 2015, it embodies several refinements underneath the skin. The vessel is more energy efficient, quicker to load and unload which enables shorter turnaround times at terminals, is lighter in construction and cheaper to run.

Although the ferry is only 43-m long and 11.5-m wide, it can still load two 52-tonne lorries. From the drawing board of LMG Marin, Hjellestad is a single-hull pendulum ferry builder Westcon believes to be the first of its kind anywhere. Equipped with Westcon’s power and control system eSEAMatic Blue, the ferry has biodiesel for backup.

The bigger steel ferries also embody significant advancements. A lot of work has gone into the parts that are not immediately visible. The hull and superstructure offer low resistance with minimum air drag. The underwater lines have been improved using computational fluid dynamics, similar to the way F1 cars are designed to improve airflow. There are no underwater appendices or skegs to slow the vessel down. And the hull has been treated with a friction-reducing preparation.

The machinery has undergone a series of incremental gains in these latest designs. The pulling-type thruster units on the bigger ferries are powered by built-in permanent magnet electric motors that deliver high performance even at very low loads. And the non-propulsion energy demands known as hotel loads have been dramatically lowered by technologies including heat recovery, LED lighting, frequency-controlled pump and fan motors, and the entire heating, venting and air-conditioning system has been designed to run in energy-sipping mode.

The concept of applying the principles of hotel-load energy efficiency is fairly new for slower ferries like the latest additions to the Norled fleet. “It was always relevant for high-speed ferries but it only came into focus for [slower speed] ferries after the introduction of batteries,” LMG Marin chief executive Torbjorn Bringedal tells Passenger Ship Technology. LMG Marin designed the bigger steel vessels as well as Hjellestad.

In one of several other refinements, all the machinery and accommodation is located inside the main hull, with the latter still at its normal height above the waterline and the car deck on top. “This is a new solution that has not been used for double-ended car and passenger ferries before,” Mr Jaguszewski says. “The main advantage of this kind of arrangement is that it frees the car deck of obstacles and enables very efficient loading and unloading as well as easy access to the passenger lounge, even for disabled passengers. These features are ideal for relatively short connections because they allow for terminal time to be reduced to a minimum”.

The latest designs show how one breakthrough leads to another. Because most functions are now located within the main hull, only a small and consequently lighter superstructure is needed for the wheelhouse. “It is a very useful second effect of the design,” adds Mr Jaguszewski.

For these latest ferries, the designer LMG Marin adapted knowledge acquired from its work on high-speed vessels. “We apply relevant lessons and technology learned from all our different ship design projects,” Mr Bringedal says. “In terms of weight optimisation we actually applied ‘light notations’ on the latest electric ferries, especially for the aluminium Hjellestad and now for an ongoing project [at Remontowa Shipbuilding].” LMG Marin has a broad portfolio of high-speed craft from which to draw lessons, such as a 24-m long carbon fibre catamaran ferry for passengers and cargo and a 38-m long catamaran for coastal traffic. Also of carbon fibre, it has a capacity of 435 passengers and top speed of 33 knots.

For the technically minded, ‘light craft’ refers to one of the main class notations in DNV GL’s high speed and light craft rules (HSLC). “The most common notation is 1A HSLC but if the speed is not above a certain threshold value, depending on speed and displacement, 1A LC will be assigned,” DNV GL maritime senior principal engineer of hulls for passenger and special ships Odd Arne Lyngstad tells Passenger Ship Technology. From a class perspective, the same basic principles apply to service restrictions and reduced corrosion allowance for LC and HSLC notations although lower speed means fewer loads on the hull.

In practice, light-craft notation fits neatly with the new battery-powered ferries because the scantlings - a standardised dimension for structural parts - may be reduced compared with the number of scantlings by DNV GL’s steel ship rules, he adds.

One welcome result is a lighter hull, but it comes at the price of more maintenance. As Mr Lyngstad explains, “a key differentiator between LC notation and DNV GL’s steel ship rules is that in the former there is no corrosion allowance as there is with steel ship builds. This means that these craft need to be more frequently and thoroughly maintained and inspected.”

Mr Jaguszewski is in full agreement. “The advantage [of light-craft rules] is that they provide more possibilities in terms of optimising structural weight.”

The latest arrivals from Westcon and Remontowa take Norway’s ferry revolution closer to its goal of an all-electric fleet by 2025. In this, the dominant supplier is Corvus Energy with energy storage systems tailored for high charge and discharge rates that are best-suited for short-run ferries. To date, Corvus has supplied energy storage systems for almost 40 hybrid and all electric ferries, including Ampere, the one that started the revolution by showing all-electric ferries could carry a good load. In sailing a distance equal to seven times around the globe, Ampere has now saved more than 4.5M litres of fuel and almost 8,100 tonnes of CO₂, according to Corvus’ calculations.

The technology of the batteries, the heart of the propulsion system, has gone ahead in leaps and bounds in the last few years, incorporating lessons learned from previous projects. Remontowa has found that power is now available virtually on demand. The batteries function in tandem with lighter and more compact machinery than before and in hybrid mode the machinery operates at a constant, optimum load. “The result is significantly lower fuel consumption compared to a traditional variable-load scenario,” Mr Jaguszewski says.

Another benefit is that the latest batteries do not have to work as hard. In pure electric mode there is still ample margin, with energy to spare, so that overheating is avoided. This in turn produces a cost benefit because a battery that is not required to run repeatedly at the limit of its capacity has a longer working life.

But it is not all about the battery – it is the whole package. Clever work in design and construction helps save energy and put less demand on the power supply. “The more efficiently the vessel can operate, the less battery capacity is required,” says Mr Jaguszewski. “And batteries are the most expensive item on board a ferry capable of pure electrical performance.”

The big-selling Corvus product in the ferry industry is Orca Energy, first launched in 2016. Among its claimed features are low installation and commissioning time, low lifecycle cost, modular and flexible design, scalable capacity and voltage according to the vessel’s requirements, and a rugged seaworthy design.

The orders keep coming in. In June Corvus was contracted to supply the energy storage system for a new fully electric ferry in Denmark, only the second in that country, that will operate a 12-minute trip between Esbjerj and Fano for Molslinjen, Denmark’s biggest domestic ferry group. To keep up with demand, Corvus has started up an automated factory in Bergen and has accelerated plans to establish a new production line in Canada for its biggest units, known as Blue Whale, as early as 2021.

“The market for these enormous battery systems will increase rapidly as cruise ships, large ferries and merchant vessels strive for zero-emissions operations,” predicted Corvus Energy chief executive Gier Bjorkeli in a release earlier this year. According to some forecasts the multi-megawatt battery sector will be valued at US$1Bn by 2026. At the current rate of development, there will be a battery for every kind of ship within a few short years.

Corvus already has a growing presence in Canada’s ferry industry. In February Damen Shipyards ordered Corvus systems for four new electric-hybrid Island-class vessels that will run on low-sulphur diesel and battery power until shoreside electric charging systems are in place. These four vessels will be delivered in 2022.

And also in February, Wartsila selected Corvus to supply batteries for three hybrid roro ferries destined for Italy’s Grimaldi Group from 2021. According to Grimaldi’s Finnlines, the 238-m long and 34-m wide scrubber-equipped ferries, with a capacity of 5,800 lane metres and more than 5,000 m³ of vehicle decks, will be the most ecologically virtuous vessels of their kind ever built.

Norled is also taking a step forward in a corporate sense. The Stavanger-based group is now led by two women, Elisabeth Grieg as chairwoman and Heidi Wolden as chief executive following the sale of the family-owned company in May 2019 to two private equity firms. The change of ownership coincides with a landmark project. The new team is working on hydrogen-powered ferries and related infrastructure in a project that the shipping world is watching closely. Backed by a Nkr33.5M (US$3.75M) government grant, Norled and its partners expect to make liquid hydrogen-fuelled shipping a commercial reality by Q1 2024, an all-encompassing project that sees the entire value chain from production, storage and transportation being established.

The first concrete result will be a Norled-run vessel that will, if everything goes to plan, become Norway’s first hydrogen-powered ferry, starting operations in 2021 on the Hjelmeland connection. Until the hydrogen infrastructure is in place, the ferries will operate on biodiesel and switch to hydrogen later. At that point, the diesel engines will be used as back-up power. Also designed by LMG Marin, two of the double-enders with a capacity of 199 passengers and 60 cars are already under construction at Ada shipyard in Turkey.