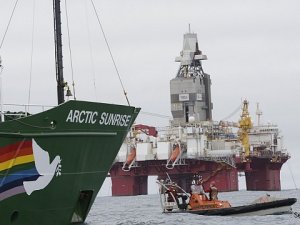 A GREENPEACE ship with 35 activists and crew members on board has been prevented by Norwegian coast guards from demonstrating at an exploration well drilled by Statoil in the Barents Sea.

A number of activists entered a 500-metre safety perimeter around Songa Enabler rig with rubber boats and kayaks, in an effort to stop the drilling of the Korpfjell well, situated 400 kilometres from Norway.

Statoil said entering the safety zone was "illegal and irresponsible". The Greenpeace vessel, Arctic Sunrise, was towed away from the drilling site to the mainland in Tromsoe, northern Norway.

Norwegian police said Greenpeace activists were ordered to leave as they were disturbing the oil drilling, in violation of Norwegian interests according to the Petroleum Act. When the activists refused to leave voluntarily, the coast guards were called in to remove them, reported Reuters.

Greenpeace said it had the right to protest peacefully in the international waters against the Arctic drilling, which the group says endangers Arctic birds and is contrary to Norway's commitment to reduce carbon emissions under the Paris Agreement.

This news is a total 1108 time has been read
Tags: Norway stops Greenpeace protest at a well drilled by Statoil in Barents Sea