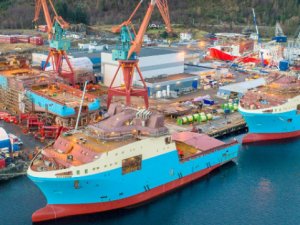 Two weeks after Kleven Verft filed for bankruptcy a deal has been announced to save the troubled Norwegian shipbuilding group and resume operations under the same management prior to the bankruptcy.

Green Yard, a Norwegian company focused on ship recycling, modifications, and lay-ups for ships and rigs, announced that it has reached an agreement with the bankruptcy authorities, banks, and creditors to acquire Kleven. According to the Norwegian media, there had been several potential bidders but in recent days the competing offers for the yard had failed to materialize.

In a brief statement, the new owners said, “Green Yard Group has plans to continue the shipyard business, but at the same time expand the business to new business areas that can provide a stable supply of work in addition to shipbuilding and maintenance.”

Green Yard also announced that it would like Kjetil Bollestad to return as CEO to run the yard which will be renamed Green Yard Kleven. Bollestad had been managing the operations including seeing the company through the recent recapitalizations and acquisitions before resigning around the same time as the bankruptcy filing. The shipyard’s CFO also recently resigned but there has been speculation in the Norwegian media that he might also return to the yard.

The court appointed trustee, Bjørn Åge Hamre, along with a Norwegian law firm, Simonsen Vogt Wiig, lead the negotiations. They also acknowledged and thanked the Kleven employees, the banks, creditors, contractors, and suppliers who had shown patience during the negotiations and made possible the agreement to save the shipyard. Green Yard was planning to meet with Kleven's employees on July 14.

A specialized shipbuilder, Kleven built ships for the offshore sector but recently sought to become more involved with cruise ships after the downturn in the offshore segment. During the past few years, Kleven had gone through a series of reorganizations seeking to enhance its finances, including investments from Hurtigruten, which had ordered two advanced cruise ships from the yard.

In January 2020, Hurtigruten agreed to sell Kleven to the DIV Group, a large Croatian industrial company that includes ownership of the Brodosplit shipyard in Croatia. The two shipyards were said to have complementary skills and combined would create a strong financial profile permitting them to better finance future construction projects. It was anticipated that the yards would collaborate on future construction projects.

Kleven's order book for 2020 had included two rebuilding contracts with additional work for Hurtigruten as well as the construction of a barge and trawler. In May, Kleven in partnership with Brodosplit announced that the two yards would be working on a new residential cruise ship due for delivery in 2024.

This news is a total 1191 time has been read
Tags: Norway's Kleven Verft Acquired From Bankruptcy by Green Yard