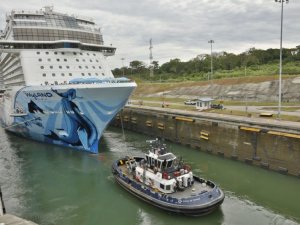 Norwegian Bliss was delivered by German shipbuilder Meyer Werft in March and, last month, began a 15-day itinerary from Miami, Florida, through the Panama Canal and along the west coast of North and Central America to its final destination in the Port of Los Angeles, California. The vessel will this serve the Alaska region until the end of the cruise season, after which it will reposition itself in the Caribbean.

The Panama Canal expects to receive approximately 236 cruise ships through the Panamax and Neopanamax Locks during the 2017-2018 cruise season, which officially began in October.

Norwegian Bliss third ship of the Breakaway Plus class of the Norwegian Cruise Line (NCL) and has passenger capacity of about 4,000.

This news is a total 721 time has been read
Tags: Norwegian Bliss Becomes Largest Cruise Ship to Transit the Expanded Panama Canal