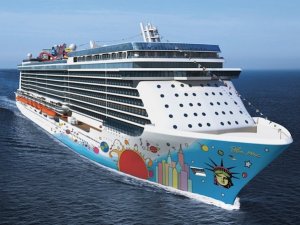 Norwegian Cruise Line Holdings Ltd , the world’s third-largest cruise operator, raised doubts about its ability to keep running as a business on Tuesday, the first in the sector to signal it may succumb to the coronavirus crisis.

The company’s shares slumped about 20% as it also launched a $1.6 billion offering of shares and bonds in a scramble to raise money, and announced a $400 million investment in a subsidiary from a private equity firm.

Norwegian Cruise and rivals Carnival Corp and Royal Caribbean Cruises have been among the most high-profile victims of the pandemic after deadly outbreaks on some cruise ships led to extended port quarantines in Japan and California.

Norwegian, which has suspended its sailings through June 30, has not yet announced a relaunch date. On Monday Carnival said it plans to resume some cruises beginning Aug. 1, pending continued efforts to coordinate with government officials.

The cruise industry was left out of a $2.3 trillion U.S. stimulus package for troubled companies as the major players are all incorporated outside the United States.

“COVID-19 has had, and is expected to continue to have, a significant impact on our financial condition and operations, which adversely affects our ability to obtain acceptable financing,” Norwegian said, also flagging substantial doubt about its ability to continue as a “going concern.”

The company said that as of April 24, advanced bookings for the remainder of the year were “meaningfully lower than the prior year, with pricing down mid-single digits.” Norwegian’s shares have lost almost 80% of their market value this year.

The Miami-headquartered company faces class action lawsuits alleging that it made false and misleading statements to the market and customers about COVID-19 and its impact on its business – allegations it says are without merit.

In March, the Florida Attorney General announced an investigation related to Norwegian’s marketing to customers during the coronavirus outbreak, based on allegations it downplayed the severity and highly contagious nature of the virus in an effort to sell cruises.

Other attorneys general and governmental agencies are conducting similar investigations, according to the company.

Norwegian said it does not have sufficient liquidity to meet its obligations over the next 12 months.

Since the start of the crisis, the company has borrowed $1.55 billion under credit facilities. At the end of last year, it had about $6 billion of total long-term debt obligations and cash and cash equivalents of $252.9 million.

Shares of Carnival were down 4.3% and shares of Royal Caribbean were down 5.6% on Tuesday.

This news is a total 523 time has been read
Tags: coronavirus, cruise ships, Norwegian Cruise Line