Norwegian Encore Squeezes through the Ems 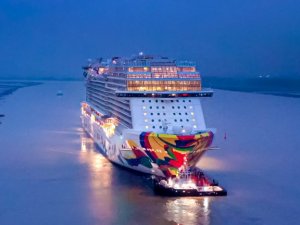 Norwegian Encore, Norwegian Cruise Line’s newest ship, has completed another major construction milestone when it departed the Meyer Werft shipyard in Papenburg, Germany, and sailed down the Ems River towards the North Sea.

On September 30, 2019, the 169,300 GT Norwegian Encore, the fourth ship in the company’s Breakaway Plus class, began its conveyance to Eemshaven, Netherlands.

Following the completion of technical and nautical sea trials in the North Sea, the newbuild is scheduled to be delivered to the cruise line in Bremerhaven on October 30, 2019.

It will be christened in Miami on November 21, 2019, and will commence seven-day voyages to the Caribbean three days later.

Watch the cruise vessel’s river conveyance in the short video below: