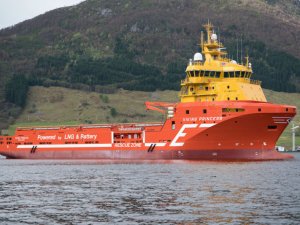 The Norwegian offshore supply vessel Viking Princess has become the first vessel of its kind to have one of its main engines replaced with battery power.

Viking Princess completed sea trials and the new hybrid energy system was handed over to Eidesvik Offshore on October 9, 2017.

Eidesvik and signed a contract with Finnish engine manufacturer Wärtsilä in May to replace one of the four engines on Viking Princess with battery power. The 5-year old vessel now runs on a combination of battery power and three LNG-fuelled Wärtsilä engines.

According to Wärtsilä, the new energy storage solution provides balancing energy to cover the demand peaks, resulting in a more stable load on the engines. The company explains the technology as being similar to that used in hybrid vehicles in that it prevents the engine load from dipping and uses the surplus to re-energize the battery, which can be charged as needed. The system also allows remote monitoring.

The hybrid system is supposed to improve engine efficiency, generate fuel savings and reduce greenhouse gas emissions. Wärtsilä says fuel savings potential alone can be up to 30 percent in various operations, while CO2 emissions can be reduced by up to approximately 13–18 percent per year, depending on operational conditions and requirements.

“Eidesvik and Wärtsilä’s partnership dates back to 2003 when our ship, the ‘Viking Energy’ became the first offshore supply vessel powered by LNG fuel,” says Vermund Hjelland, President Technical Department, Eidesvik Offshore. “Now, together, we are again introducing a world’s first, with the ‘Viking Princess’ becoming the first offshore vessel in which batteries reduce the number of generators aboard the ship. We are grateful to Wärtsilä for providing the technology to make this possible.”

This news is a total 728 time has been read
Tags: Norwegian Offshore Supply Vessel First to Replace LNG Engine with Battery Power