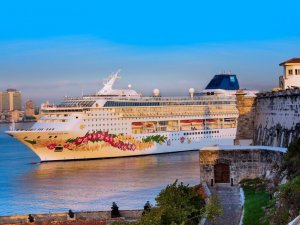 Norwegian Cruise Line had its first ship, the Norwegian Sky, call in Havana, Cuba on May 2.

The call was the first of Norwegian Sky’s 53 planned four-day voyages weekly from Miami to Cuba, with 52 including an overnight stay in the capital of Havana.

Earlier this year, the cruise line company said that it would extend its offering of weekly roundtrip cruises from Miami to Cuba through 2018, with 33 new voyages.

These new cruises are scheduled to begin on March 26, 2018 and are in addition to the previously announced 30 calls that Norwegian will offer through December 2017.

The company said that the extension was prompted by “incredible demand” from the guests for the destination.

The Cuban government granted its approval to Norwegian Cruise Line Holdings to begin cruises to Cuba in December last year.

This news is a total 923 time has been read
Tags: Norwegian Sky in Maiden Visit to Havana, Cuba