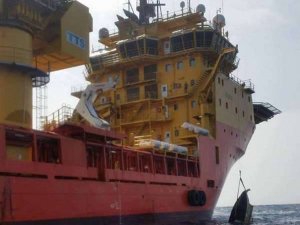 A Norwegian supply vessel has located and recovered the 19-foot boat belonging to two Florida teens who went missing at sea last summer.

The U.S. Coast Guard and Florida Fish and Wildlife Conservation Commission confirmed the identity of the vessel this past Saturday after it was located and recovered by the MV Edda Fjord on March 18 approximately about 100 miles off the coast of Bermuda.

A marine store sticker and the engine serial number helped identify the vessel as that of the boys. Personal items found on board included plastic tackle boxes and a cell phone, which authorities hope will provide clues into the boys’ disappearance.

Due to the ongoing search for the teens, the boat was never recovered or located again.

“On behalf of Perry’s entire family we would like to thank the Captain of the Norwegian Ship Edda Fjord and his crew of 16 for all your efforts in recovering and salvaging the Vessel in which our son and his dear friend disappeared on,” said Pamela Cohen and Nick Korniloff in a statement posted over the weekend to the Perry J. Cohen Foundation‘s facebook page. “We sincerely appreciate the generosity of you and your company Edda Accommodation in financing the shipment of the vessel and private belongings back to the United States. The actions of yourself, crew and company will hopefully provide more details for us with the hopes of finding out what exactly happened to our son and his friend.”

“I am proud of the crew for doing everything correct according to their maritime duty by investigating the floating object,” commented Johan Rokstad, CEO of Edda Accommodation. “Not only did they remove a hazard to other vessels, but in this case they also found something of great value to these teenagers’ families. Our heart goes out to the families and we hope they find some closure in these findings.”

The FWC, U. S. Coast Guard and the families are working with Edda Accommodation, to arrange for the return of the boat and the personal effects that were aboard.

This news is a total 12487 time has been read
Tags: Norwegian Supply Ship Finds Missing Florida Teens’ Boat Off Bermuda