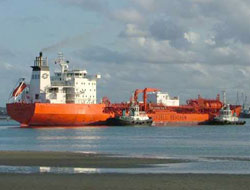 A chemical tanker controlled by Norwegian shipowning firm Odfjell has run aground off Indonesia.

A chemical tanker controlled by Norwegian shipowning firm Odfjell has run aground off Indonesia.

Odfjell reported late Thursday that its chemical tanker Bow Star ran aground after leaving the Indonesian port of Batam.

There were no injuries and the vessel's double hull was believed capable of preventing any environmental damage.

"There has been no injury to personnel and no pollution," Odfjell said in a statement. The Bergen-based company said "some of the double-bottom ballast tanks were leaking," but noted the weather was calm, and that the ship was "stable and safe."

There was no cause given for the grounding. The 39,832-dwt Bow Star was built in 2004 at Poland's Szczecin shipyard. Odfjell said it has Norwegian officers on board and a Filipino crew.

This news is a total 1496 time has been read