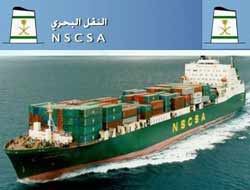 A unit of the National Shipping Company of Saudi Arabia (NSCSA) - the National Chemical Carriers (NCC) - has secured $250 million in Islamic financing to fund fleet expansion.

A unit of the National Shipping Company of Saudi Arabia (NSCSA) - the National Chemical Carriers (NCC) - has secured $250 million in Islamic financing to fund fleet expansion.

National Chemical Carriers, of which NSCSA owns 80 per cent and Saudi Basic Industries Corp. (SABIC) the remainder, will use the financing to buy six new chemical carriers being built by South Korea's SLS Shipbuilding, according to an NSCSA statement on the bourse web site. It said that the ships will be delivered during 2010 and 2011.

NSCSA was established in 1979 to meet the transportation needs of importers and exporters in Saudi Arabia and other countries in the Middle East. By 1983, NSCSA had established itself as a combination roll-on roll-off (Ro-Ro), container and breakbulk carrier, operating 8 fully owned vessels. It had become one of the world's largest Ro-Ro operators, offering liner services linking the Middle East with North America, the Far East and Europe.

In 1991, NSCSA (America) Inc. was established to serve as the general agent in North America for the Liner Service between US, Canada and the Middle East/India Subcontinent/East Mediterranean regions.

NSCSA specialises in project, heavy lift and Ro-Ro cargoes, as well as containers. In 1997, NSCSA began service between North America and Italy, Greece and Turkey.

During the course of its diversification, the company's services have expanded to include transportation of general cargo, crude oil, chemical and LPG as well as specialised ship management. Having started its operations for transporting general cargo and containers, the company with its commendable track record, has established the reputation of providing high standard of service to its customers at all international ports it is serving.

In its plan to expand its activities further, NSCSA entered into LPG transportation business by acquiring 30 per cent share from Petredec Limited, which is the leading company in LPG transportation in the world.
The company also owns a very large fleet of chemical carriers and has become one of the largest companies in the world in this field. This could be attributed to the world-class services provided by NCC.

"NSCSA strongly believes that expansion and improvement of its services in the shipping field would not only improve the welfare of the trading community but also would richly contribute to the development of national economy which is its primary goal," the statement said.