Number of orders have fallen 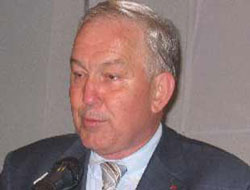 Ship orders from abroad decreasing considerably because of the shipyard closing case.

Shipbuilding industry will get into difficult period

Ship orders from abroad decreasing considerably because of the shipyard closing case.

The idea of "closing shipyards" because of problems in shipyards have affected the image of sector at abroad negatively and caused decreasing number of ship orders from abroad. While only 3 ships were ordered to the shipyards throughout Turkey in tle last 6 monts, last year there were 6 orders in the same time period.

Chamber of Shipping Izmir Office Chairman Géza Dologh noted that shipbuilding industry will get into difficult period after the effects of speech "shipyards must be closed" on the numbers of export ship orders.

"Turkey ranks number eight in shipbuilding area throughout the world but it can be lost because of shipyard closing idea. Shipbuilding industry was at golden age since 2004. But when the shipyard closing idea came to agenda, the number of orders from abroad have fallen. There was significant foreign currency inflow by outside orders. By the end of June, only 6 of 72 vessels, which were contracted, have been sent. In 2008, only 3 of 103 vessels have been sent. We must not decrease the success rate that we achieved at abroad" said Géza Dologh.

This news is a total 1796 time has been read