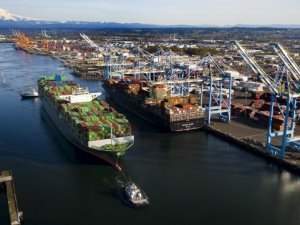 The ports of the Pacific Northwest experienced a steep decline in cargo traffic during April due to the economic impact of the COVID-19 pandemic.

According to the Northwest Seaport Alliance, a marine cargo operating partnership of the ports of Seattle and Tacoma, total container volumes declined more than 20 percent in April to under 250,000 TEUs. Full imports declined nearly 14 percent while full exports decreased nearly 18 percent compared to year ago period.

Like many other container ports, the Northwest Seaport Alliance attributed the considerable declines to the current public health emergency that is causing disruptions in manufacturing and trade as well as the repercussions from the lingering trade dispute with China.

“It’s difficult to predict how our cargo volumes will trend, given the current uncertainty about when and how the U.S. and other economies will emerge from this crisis,” said John Wolfe, CEO of the Alliance. “While we expect a difficult second quarter, based on the currently scheduled number of blank sailings, we are cautiously optimistic for gradual improvement in the third quarter, accelerating through the fourth quarter.”

The Northwest Alliance reported that it experienced a total of 39 void sailings through April, which contributed to a 17.5 percent decline in total container volumes this year. Year to date, the ports have handled just over 1 million TEUs with only a small decline in domestic container volumes so far this year, including traffic with Alaska and Hawaii.

Despite the current challenges, all marine cargo terminals in Seattle and Tacoma remain open and operational. Combined, the ports of Seattle and Tacoma are the fourth-largest container gateway in North America and also have operations for bulk, breakbulk, project/heavy-lift cargoes, and the shipment of automobiles and trucks.

This news is a total 1173 time has been read
Tags: NW Seaport Alliance Reports Steep Volume Declines Due to COVID-19