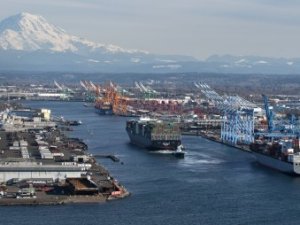 In October, the NWSA’s overall container volumes were 310,066 TEUs, a 7.2% decrease from an unusually high October 2018. International imports were down 15.4%, while exports were down 4% for the month. Full exports for the month grew 7.1% due to strong demand for U.S. agricultural products in established and emerging markets in Asia outside of China. The impact of the ongoing trade war continues to be felt with full international imports contributing to most of the decline.

Domestic container volumes in October increased 6.8% over October 2018. Alaska’s and Hawaii’s year-to-date volumes were up 6.1% and 1.4%, respectively.

Terminal 5 modernization project continues in the North Harbor. Soil excavation to install new crane rail are underway. Crews are also installing rebar and forms for a new electrical vault. Upgrading the power supply from 5 MW to 25 MW will provide shore power capabilities and supply power up to 1,000 refrigerated containers.

This news is a total 479 time has been read
Tags: CONTAINER VOLUMESş NORTHWEST SEAPORT ALLIANCE (NWSA)