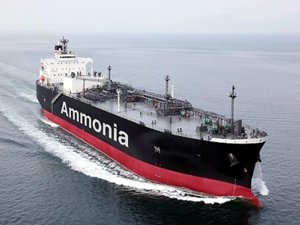 In Japan, a group led by NYK Line announced efforts to speed the commercialization of ammonia while in China a new research partnership is being launched by China Merchants and the Italian and Chinese class societies.

A broad range of initiatives is continuing to work on developing new sources of fuel for the maritime industry. In Japan, a group led by NYK Line announced efforts to speed the commercialization of ammonia while in China a new research partnership is being launched by China Merchants and the Italian and Chinese class societies.

Ammonia is viewed as one of the most promising next-generation fuels for the maritime industry as ammonia does not emit carbon dioxide (CO2) when it is burned. Researchers believe that using hydrogen to develop ammonia would achieve the goal of zero emissions.

Calling it the world's first effort to stably supply ammonia fuel to ocean going vessels, NYK Line, Japan Marine United Corporation, and Nippon Kaiji Kyokai (ClassNK) signed a joint R&D agreement. Their goal is the commercial development of an ammonia-fueled ammonia gas carrier (AFAGC) that would use ammonia as the main fuel. In addition, they will work to develop an ammonia floating storage and regasification barge (A-FSRB).

Currently, according to NYK, large-scale marine transportation of ammonia is carried out by multi-purpose LPG vessels. The project will focus on the R&D for the development of a liquefied ammonia gas carrier.

The second goal of the NYK R&D project is the development of the world’s first barge that is equipped as a floating storage and regasification facility exclusively for ammonia. This project is expected to contribute to the early introduction of ammonia fuel by utilizing the barge as an alternative to land-based storage tanks and regasification facilities for the stable supply of ammonia fuel.

With a goal of contributing to the overall industrial decarbonization efforts, the R&D program also aims to use its solutions for the introduction of mixed combustion of ammonia into coal-fired power stations currently operated by Japanese electric power companies.

In a separate announcement, China Merchants Industry entered into a new agreement with RINA, the Italian Classification Society, and the China Classification Society for a research effort into new marine energy sources. The three organizations will work together to research the development of hydrogen and ammonia energy technology.

The three companies said in the announcement of their collaboration that they would seek to leverage their respective efforts in research and development to create new energy application technologies. China Merchants said that it believes that hydrogen energy will be a leading technology in future energy development.

This news is a total 2254 time has been read
Tags: NYK and China Merchants Launch Initiatives to Commercialize Ammonia