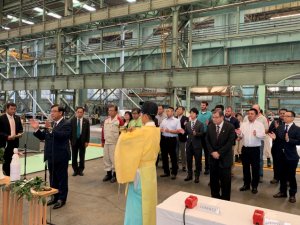 Japanese shipping major Nippon Yusen Kaisha (NYK) has placed an order for what it claims to be the world largest LNG-fueled pure car and truck carrier (PCTC).

A keel laying ceremony for the 73,500 GT vessel was held at NYK’s compatriot Shin Kurushima Toyohashi Shipbuilding on September 20, 2019.

The newbuild is scheduled to be delivered in 2020 and will be the first large LNG-fueled PCTC to be built in Japan, according to NYK. To fly the domestic flag, it will feature a length of 199.95 meters and a width of 38 meters.

In order to minimize a reduction in vehicle loading capacity caused by the installation of LNG fuel tanks, in addition to optimizing major items such as ship width, several designs for maximizing the cargo loading space will be implemented, and the new vessel will be able to transport approximately 7,000 units per voyage, the company said.

As explained, the ship will be about 40% more energy efficient, exceeding the International Maritime Organization (IMO) EEDI phase 3 requirements* that will become effective in 2025. The vessel is additionally expected to reduce sulfur oxide (SOx) emissions by approximately 99% and nitrogen oxides (NOx) by approximately 86% compared to conventional heavy oil–fired engines.

Over the past few years, NYK has been steadily moving toward using LNG as a propulsion fuel. Back in 2016, NYK built the world’s first LNG-fueled car carrier which entered in service in 2017.

This news is a total 279 time has been read
Tags: LNG-Fueled, NYK, PCTC. Unlocking Improved Safety and Standards for Dry Bulk ShippingThe shipping industry is facing a truly unprecedented challenge with COVID-19; a challenge that nobody could have possibly anticipated.