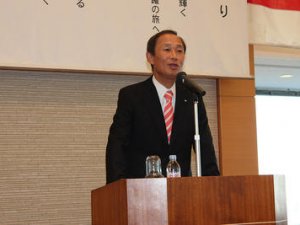 According to Kudo, the uncertainty is fueled by geopolitical risk in the Middle East and Ukraine, the risk of changing climate patterns causing major natural disasters, and instability in exchange rates and oil prices.

“While the demand side is maintaining an expansionary tone, supply pressure in shipping capacity remains deeply rooted, particularly in terms of containerships and bulk carriers. As a result, we are unlikely to see any resolution of the overall gap in supply and demand in the short term,” he explained.
NYK President attributed to this the increasing demand to replace fleets with more fuel-efficient vessels due to rising fuel oil costs, and the expansion in ship construction for investment purposes due to low interest rates and excessive capital worldwide.

In terms of expectations for 2015, Kudo said the world economy is generally maintaining its trend towards improvement and growth, which could result in a steady increase in the volume of cargo movement again in 2015.