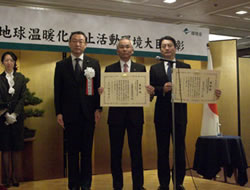 Nippon Yusen Kaisha and the Monohakobi Technology Institute (MTI), an NYK Group company, have received Japan’s 2012 Minister of the Environment Award in the technical development and commercialization categories for the promotion of measures to address climate change.

The award was established in 1998 by Japan’s Ministry of the Environment and is given every year in December to coincide with Global Warming Prevention Month. The recognition is presented to individuals and groups that have shown remarkable achievements in addressing climate change.

The award was presented in recognition of the NYK Group’s development and operation of an energy-saving air-lubrication system for vessels. This new technology effectively reduces the frictional resistance between a vessel’s bottom and the seawater by means of bubbles generated by air released from the bottom of the vessel.

In 2010, an air-lubrication system featuring a blower to provide air to the vessel bottom was permanently installed on two vessels operated by NYK-Hinode Line Ltd., also an NYK Group company, marking the first permanent installation of such a system within the shipping industry. Over the next two years, CO2 emissions from these vessels fell by an average of 6 percent during sea passages.

In 2012, an air-lubrication system featuring a scavenging-air bypass to provide air to the vessel bottom, a system more suitable for larger vessels having deeper drafts, was installed on a coal carrier for the first time and, depending on the amount of cargo carried, CO2 emissions were 4–8 percent less.

The NYK Group will continue to encourage initiatives for the development of energy-saving technology that addresses climate change by actively advancing the installation of this air-lubrication system on car carriers and other types of vessels.

This news is a total 7252 time has been read