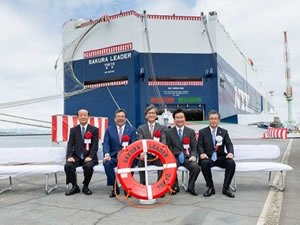 According to Japanese media reports, The move is reportedly in response to car makers wishing to reduce the CO2 footprint of their products.

Car makers have been trying to reduce emissions in their supply chains. LNG-fuelled transporters are already a bidding requirement for companies that want to work with Germany’s Volkswagen.

Japan’s Toyota Motor began to demand carbon dioxide emission reductions from major suppliers that it has direct transactions with and is expected to make similar requests of its transportation companies in the future.

Honda Motor is also expected to try to cut emissions in its supply chain.

The order for the 12 7,000ceu vessels will be split between Shin Kurushima Dockyard and Nihon Shipyard, which is an joint venture of Imabari Shipbuilding and Japan Marine United, to build six vehicle carriers each. Last year, NYK took delivery of Sakura Leader its first LNG-fuelled car carrier and has another under construction.