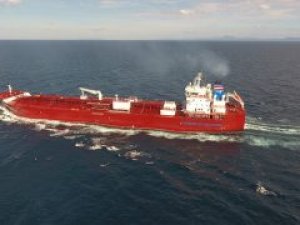 As explained, the 49,000 dwt Takaroa Sun was equipped with the MAN Energy Solutions’ two-stroke dual-fuel engine that runs on both methanol and conventional marine fuel. The vessel also has a processor that reduces nitrogen oxides (NOx) so that it meets the IMO’s stringent Tier III regulation.

Featuring a length of 183 meters and a width of 32.2 meters, the 57,000 cbm ship flies the flag of the Norwegian International Ship Register (NIS).

Takaroa Sun will be chartered to Waterfront Shipping Company Limited (WFS), a subsidiary of Methanex Corporation, the world’s largest producer and supplier of methanol, in a long-term time-charter agreement between WFS and NYK Bulkship (Asia), an NYK Group company based in Singapore.

“We are delighted to establish this relationship with WFS, which has expertise in methanol shipping, and we welcome our first methanol-fueled vessel into our fleet. Making use of the NYK Group’s … vessel management featuring advanced, new technology, we plan to fully meet the expectations of WFS,” Takeshi Kishi, managing director of NYK Bulkship (Asia), commented.

“We are very pleased with the performance of our existing methanol-fueled vessels that have proven the safety and reliability of the technology. With the delivery of Takaroa Sun, we are continuing to benefit from innovative technological advances that will optimize performance and efficiency,” Paul Hexter, President, Waterfront Shipping, said.

“On an energy-equivalent basis, methanol is cost-competitive over the cycle and we see significant value creation opportunities from using a methanol flex-fuel engine.”

As a marine fuel, methanol is safe, biodegradable, and clean-burning, offering compliance with the International Maritime Organization’s (IMO) 2020 regulations by reducing sulphur oxides (SOx) by approximately 99 percent. With the ability to be produced from renewable sources, methanol can also provide a pathway to meeting future carbon emission reduction targets.

This news is a total 614 time has been read
Tags: Methanol, Methanol carrier, NYK, Waterfront Shipping.