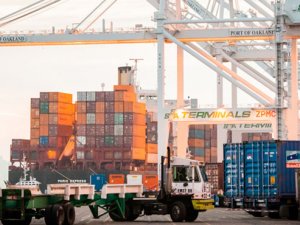 Cargo volume that has reached an all-time high at the Port of Oakland is fueling the big buildup of freight which has slowed cargo throughput.

A labor dispute between waterfront employers and dockworkers is magnifying the slowdown, the port said.

The condition is expected to persist until labor and management agree on a new contract, as explained by the port.

A 20% surge in December loaded import containers at the port contributed to the record performance that was last set in 2006 with handled equivalent of 2.394 million 20-foot freight containers in 2014.

A freight backlog at the ports of Los Angeles and Long Beach has rerouted thousands of containers to Oakland. Last month Oakland handled 74,356 loaded import containers. That was the most since May 2014.

The Port of Oakland said overall container volume – imports and exports – increased 2% in 2014. Import volume for the year increased 5.29%.

This news is a total 2034 time has been read
Tags: americas, cargo, Congestion, News by topic, port, Port of Oakland, record, SHIPPING, Volumes