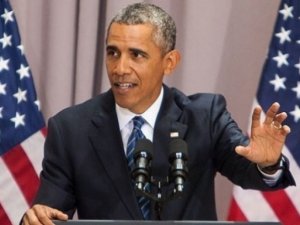 "We use this period where gas prices are low to accelerate a transition to a cleaner energy economy," US president says

A per barrel oil tax is a smart way to lower U.S. dependence on hydrocarbons and increase clean energy use, President Barack Obama said Friday.

During a White House press conference, Obama said current low energy prices is an opportunity to do just that.

"What is important is that we use this period where gas prices are low to accelerate a transition to a cleaner energy economy because we know that's not going to last," he said, adding that actions taken now will place the U.S. in a stronger position to handle rising energy prices in the future.

''We will have further weaned our economy off of dirty fuels ... we'll also have a much a stronger infrastructure. I think we'll look back and we'll say ... that was a wise decision for us to make," he added.

The White House announced Thursday that Obama will next week submit to Congress his final budget that includes a $10 fee on every barrel of oil produced in the U.S., to be paid by oil companies. The fee would be gradually phased in over five years.

Revenue from the tax will be used to fund clean energy investments and to improve transportation infrastructure.

"Some of that revenue can be used for the investments in basic research and technology that's going to be needed for the energy sources of the future," he said.

Noting that private sector solar jobs are growing 12 times faster than the rest of the economy, the president said his budget will double investment in clean energy research and development, help businesses create more jobs faster, lower the cost of clean energy faster and help renewable power compete with dirty fuels in a more effective way.

Turning his attention to the unemployment rate falling below 5 percent for the first time since 2008 with 151,000 new jobs in January, Obama said the U.S. has the world’s strongest, most durable economy but there is still work to be done.

"There is softness in the global economy. China is going through a transition. Europe's economy is still slow. A lot of the emerging markets are challenged. So that's all creating head winds for a lot of U.S. companies who do business overseas. It makes it more difficult for us to sell exports," he said.

His budget will provide more jobs, training and education, according to Obama, who said his administration will target specific segments of the population -- unemployed middle-aged and high school dropouts -- to integrate into the labor market.

"We've got to make special efforts to figure out how do we get them into job training programs or community college, and allow them to get some skills ... we want to keep making sure that the labor market is as strong as possible," he said.

The participation rate, which indicates the labor supply by measuring the share of population either working or looking for work, increased to 62.7 percent in January, up from 62.6 percent in December but lower than historic levels.

Obama also underlined that progress in the job market is finally starting to translate into bigger paychecks.

This news is a total 5397 time has been read
Tags: Obama, Per, barrel, oil, tax, is, smart, investment, Turkish, Maritime