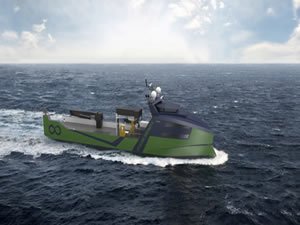 U.S.-based subsea exploration company Ocean Infinity has signed shipbuilding contracts for eight shore-controllable vessels in what is being described as a major step forward in the development of unmanned and remotely-controlled vessel operations.

Contracts for the design and construction of the eight vessels was signed with Norwegian designer and shipbuilder Vard, which is part of Italian-based Fincantieri.

The new 78-meter-long vessels are described as a multi-purpose platform with features including shore-based remote control, light crewed or uncrewed operations, and alternative fuel-capability such as green ammonia.

The vessels are planned to join the fleet of Ocean Infinity’s new marine robotics company Armada, which is in the process of building a fleet of nine 21-meter and 36-meter vessels at Vard.

Armada’s nine smaller vessels are already in production and expected to operational by early 2021.

The first 78-meter vessel is expected to launch in mid-2022 with all eight deliveries to be completed by the end of 2023, according to Vard.

The vessels will be constructed at the Vard Vung Tau shipyard in Vietnam, with design and engineering currently ongoing at Vard Design and development of the onboard control systems at Vard Electro in Ålesund, Norway.

“We are honored to be chosen as Ocean Infinity’s partner in this project. Together we take a huge leap forward into a new segment of the maritime industry by developing and providing vessels prepared for the future. All according to our strategy for innovation and sustainability,” says Alberto Maestrini, CEO in VARD.

For remote operation, the vessels will use Vard Electro’s SeaQ Integrated Automation System and SeaQ Power Management System. Initially, Ocean Infinity plans to operate the vessels using only a skeleton crew, but in time they expect to shift to 100% unmanned and renewable operations.

“The impact and the scale of this robotic fleet will spark the biggest transformation the maritime industry has seen since sail gave way to steam,” said Oliver Plunkett, CEO in Ocean Infinity. “With our new fleet we will be able to provide sustainable services to all corners of the industry from offshore energy, to logistics and transport.” Ocean Infinity announced the launch of Armada in February.

The company is touted as a new pioneering marine technology and data company with a focus on combining technology and sustainability. Ocean Infinity plans for Armada to initially operate a fleet of fifteen custom-designed “unmanned surface robots” to complement Ocean Infinity’s current fleet of autonomous underwater vehicles.

“Each unmanned surface robot will serve a wide range of industries by being fully equipped to perform a multiplicity of offshore data acquisition and intervention operations down to a depth of 6,000 meters,” Ocean Infinity said in a press release in February.

“These robot ships will be capable of remotely deploying a wide range of the latest sensors as well as AUVs and ROVs for visual and acoustic data acquisition.” As a deep sea exploration firm, Houston-based Ocean Infinity has been behind some of the most high-profile deep ocean finds in recent years, including locating the missing Argentine submarine ARA San Juan in 2018, as well as finding the missing sunken ore carrier Stellar Daisy in South Atlantic Ocean in 2019.

The company also led the private search for the MH370 aircraft in the Indian Ocean, which was ultimately unsuccessful.