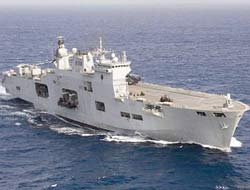 Plymouth-based Helicopter Carrier HMS Ocean, the Royal Navy’s largest warship, has seized nearly half a tonne of cocaine during its current maritime security patrol in the Atlantic and Caribbean.

Patrols in Atlantic and Caribbean net half a tonne of drugs.

Plymouth-based Helicopter Carrier HMS Ocean, the Royal Navy’s largest warship, has seized nearly half a tonne of cocaine during its current maritime security patrol in the Atlantic and Caribbean.

Netting 12 bales of the drug, with a street value of around £28 million, this represents yet another significant victory in the war against drugs, which has seen the Royal Navy seizing over £1bn worth in the last 15 months alone.

Having detected a small aircraft flying over the sea, the ship despatched one of its Sea King aircraft fitted with state of the art surveillance radar to investigate. The helicopter, from 854 Naval Air Squadron based in Culdrose, Cornwall, tracked the aircraft and called in the support of a Merlin aircraft from the ship together with a US Customs and Border Protection aircraft.

Unaware that its activities were being closely monitored, the smugglers’ aircraft dropped its cargo of drugs into the sea close to a waiting boat whose occupants started to drag the bales onboard. However, on seeing the aircraft the boat’s occupants quickly threw the bales of cocaine into the water.

The boat was chased by the US Coast Guard whilst the drugs were guarded from above by the Merlin, of 700M Naval Air Squadron – also from Culdrose in Cornwall. Fearing that the drugs would later be recovered by more smugglers from the team, the Merlin crew set about recovering the bales of cocaine from the sea. The drugs were safely flown to HMS Ocean, where they were weighed in at 480 kilograms.

The ship has been on patrol in the Atlantic and Caribbean since March and, whilst this is the first capture of drugs, her crew have been busy working with both the US Coast Guard and other UK and US agencies, gathering intelligence. Commanding Officer, Captain Russ Harding said “This is excellent news, particularly as it bears all the hallmarks of good teamwork. My ship’s company, assault squadron and air group, joined by US Coast Guard forces, have worked closely with one another to form a really tight unit aimed at taking drugs out of the hands of smugglers and dealers.

“This haul gives us confidence in the value of that teamwork, our people and the equipment which we are using and brings us much satisfaction in taking drugs off the streets.

“We have colleagues across Defence delivering results every day worldwide, particularly in the Gulf and Afghanistan, and this gives us immense satisfaction knowing that what we are doing will make an immediate difference in its own way in the UK as well.”
He went on to add, “We now look forward to re-doubling our efforts in carrying out this vital maritime security work which remains a high priority for our Government and the Royal Navy.”

Secretary of State for Defence Des Browne said “HMS Ocean has scored a real success against the drugs trade, which blights so many lives. Her crew deserve congratulations for their fast work and professionalism, which has kept millions of pounds worth of drugs off the streets. Scooping such a large haul is an impressive achievement”

HMS OCEAN was ordered from VESL. However she launched Wednesday, 11th October 1995 by Kvaerner, Govan on the Clyde before final outfitting took place at Barrow.

This news is a total 598 time has been read