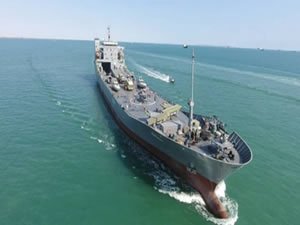 The ceremony of joining the ocean-going warship “Rudaki” to Iran's Islamic Revolution Guards Corps (IRGC) Navy was held in the presence of the IRGC's Commander-in-Chief in Bandar-Abbas, southern Iran.

Iran Press: According to the Public Relations of the Navy of IRGC, Shahid Roudaki oceangoing warship is a heavy, multi-purpose, and long-range vessel capable of carrying all types of aircraft, UAVs and missiles, defense, and radar systems.

All of them are domestic products. Rudaki is a mobile naval city that is ready to carry out ocean missions with all the necessary equipment and facilities by creating stable security of sea lines and providing relief to the Islamic Republic's commercial and fishing fleets and the region's countries.

With the joining of the heavy vessel, the IRGC Navy mission for a powerful presence in distant waters began today (Thursday).

This news is a total 5209 time has been read