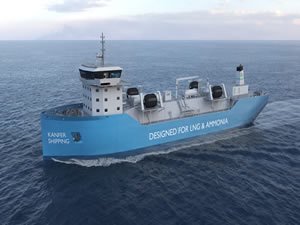 Kanfer Shipping AS, a Norway-based shipping company focusing on small-scale LNG and LNG bunkering, and Australia’s Oceania Marine Energy have signed a Letter of Intent (LOI) to build an ammonia-ready LNG bunkering vessel.

The two companies said the vessel was part of their strategy to develop a long-term zero emission sustainable shipping industry in Australia using LNG as the transition fuel and move towards green ammonia and methanol as the targeted fuel for bunkering vessels operating in the Northwest and Eastern ports of Australia. Meanwhile, Oceania is progressing its LNG bunker license applications with key port authorities and is engaging in preliminary talks with Australian natural gas and green ammonia developers.

“At Oceania, we are thrilled to be working with Kanfer Shipping to activate Australia’s competitive advantage, connecting its production of sustainable energy with its position at the apex of the Asia-Pacific commodity trade route.

Kanfer has an exclusive design license with compatriot CGR Arctic Marine AS for LNG distribution and bunker vessels under the cooperation agreement sealed in July last year.

The shipping company said that the new vessel design will use LNG as a fuel combined with hybrid and peak energy-saving technologies from Kongsberg Maritime.

It will feature Rolls-Royce Bergen gas engines, which can be converted to operate on ammonia.

The vessel is designed for simplicity and can be adapted to load LNG, methanol, or ammonia, according to Kanfer.

“The Northwest and Eastern regions of Australia have among the highest levels of heavy tonnage marine traffic in the world, making them ideally suited for adoption of zero-emission fuels,” Stig Hangen, Managing Partner, Kanfer Shipping, added.

“We strongly believe in the green/blue ammonia as a future fuel and for Australia to become a leading producer.”

“Our LNG solution already gives a net 18% greenhouse gas (GHG) reduction (including methane slip), and it can be converted to ammonia when the technology and infrastructure are ready,” Kjell Harloff, Senior Vice President, Engines, Kongsberg Maritime, commented.

​​​​​​​The announcement is being made on the back of a recent contract signing between Kanfer Shipping and Taizhou Yard for the construction of two LNG bunker vessels.

The 6,000 cbm vessels are scheduled for delivery by the second half of 2023. Under the terms of the contract, Kanfer has options to build two additional vessels of the same size.