'Oceanic' will be replaced 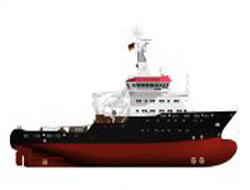 New Emergency Towing Vessels will protect the German coastline in the North Sea and the Baltic.

Germany is to have new Emergency Towing Vessels (ETVs) to replace two existing tugs currently on station to protect the German coastline in the North Sea and the Baltic.

The new German ETV for the North Sea region will replace the well known 'Oceanic'. The country's Federal Transport Ministry has signed contracts for the charter of both new vessels, which will be constructed by the ARGE Kstenschutz, a consortium comprising Bugsier, Fairplay Richard Borchard, Unterweser Reederei and Wiking Helikopter. Members of the ARGE Kstenschutz operate the existing vessels and a number of other maritime emergency services.

The vessel planned for the North Sea will replace the existing vessel, the well known but aging deepsea salvage tug Oceanic, operated by Bugsier Reederie. It is reported that under the German Ministry contract the government pay up to EUR114m to operate the ETV for ten years, commencing in 2011. This deal is the result of protracted negotiations covering all aspects of the construction and charter, including the specification. Increases in the size and frequency of very large containerships using North Sea shipping routes to the Elbe and Weser were a major factor in the decision making process.

The existing charter under which the Oceanic is chartered has been extended until the end of 2010 to afford continuity. Oceanic is the sole surviving member of a large fleet of deepsea salvage tugs once operated by Bugsier in the 1970-80s. This impressive 87.5m, twin screw vessel was built in 1969 along traditional lines and has been modernised where necessary. Two Deutz main engines generate 13,200bhp to give Oceanic a bollard pull of 174 tons.

Plans for the new ETV for the North Sea area are well advanced and under the control of Bugsier. Skipskonsulent of Bergen, Norway is responsible for the design and tank testing and other preliminary work is expected to be completed this month. The vessel will be 78m in length overall, with a beam of 16.4m and draft of 6.0m. The German shipyard Peen-Werft Wolgast has been entrusted with the construction of the new tug, which will be equipped for towing, salvage, fire fighting and pollution control duties and will be capable of operating in hazardous atmospheric conditions. Two MTU 20V8000 diesels, rated at 8,600kW each will power the twin-screw propulsion system to give the tug a bollard pull of at least 200 tons and a top speed of over 19.5 knots. The ETV will patrol the coastline off Norderney and is due to go on charter in January 2011.

The German Transport ministry has also approved a plan to build and operate a purpose designed ETV to assist in the protection of the Baltic coastline, from the current station in the Rostok-Warnemund area. It is reported that government funds of EUR67m will cover a ten year charter commencing on 1 July 2010. Fairplay Towage currently operate the Fairplay 26 in this role, a 5,500bhp ASD tug of 65 tons bollard pull, equipped for fire fighting and emergency response.

Under the new contract Fairplay, as a participating member of the ARGE, will organise the construction of an emergency response tug similar in design to the Spanish SASEMAR vessels Luz De Mar and Miguel De Cervantes, completed by Astilleros Armon of Navia, Spain in 2005. The new vessel will have a conventional twin screw propulsion system with controllable pitch propellers and Kort nozzles, powered by a pair of GE 16V 250 main engines, each developing 4,239 kW (a total of approximately 11,500 hp). This arrangement is expected to give the ETV a bollard pull of at least 100 tons and minimum free running speed of 16.5 knots. A vessel of 62m in length and 14m beam, the tug will have a draft of 5.5m and hull construction meeting the necessary criteria for Ice class E2.

Astilleros Armon will construct the new ETV that will replace Fairplay 26 on the Rostock-Warnemund station on commencement of the new contract.