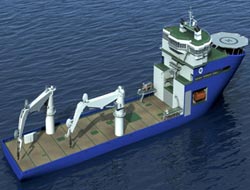 An offshore construction vessel (OCV) under construction for Norway's North Sea Invest SA at Astilleros Barrera in Vigo, Spain, is the largest and most powerful ship ever fitted with VSP as main propulsion systems.

An offshore construction vessel (OCV) under construction for Norway's North Sea Invest SA at Astilleros Barrera in Vigo, Spain, is the largest and most powerful ship ever fitted with Voith Schneider Propellers (VSP) as main propulsion systems.

The 145-meter long and 30-meter wide OCV can accommodate more than 120 crew members. It has two heave compensated cranes that adapt hydraulically to prevailing sea movements, as well as a helipad. During long-term deployments at sea, boat and crew can therefore be supplied from the air.

The maximum sailing speed of the ship is 16 knots,

"The ultimate reason for the OCV being fitted with Voith components is the performance that we can achieve with the VSP in combination with our roll stabilization system," says Project Manager Ivo Beu of Voith Turbo Schneider Propulsion. As the search for new oil and gas fields is increasingly extended to sea areas and, most of all, greater and greater ocean depths, it is essential for ships to have such equipment. "This OCV is, for example, ideal for the laying of pipelines.

It has a large deck surface for preparatory work," says Beu, and names a possible area of application. "Only recently, new oil reserves have been discovered in 3,000 meters depth in the Santos Bay just outside Rio de Janeiro. In order to set up appropriate extraction sites, OCVs such as this one will be indispensable."

This news is a total 742 time has been read