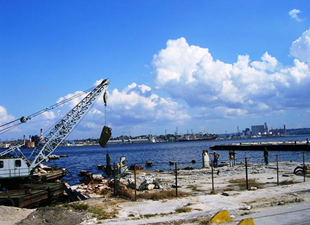 Cuba’s improved relations with the United States could lead to a more rapid expansion of the port upon which the country has staked much of its economic future, an executive whose company built the port said on Friday.

Brazilian conglomerate Odebrecht SA completed the $800 million project at Mariel, west of Havana, a little over a year ago. It is seen as a potential distribution center for the Caribbean and Central and South America and is at the heart of a special development zone designed to attract foreign investment in Cuba.

The United States and Cuba are restoring diplomatic relations after five decades of hostilities, though full trade and travel will take longer as President Barack Obama needs the Republican-controlled Congress to completely lift the U.S. economic embargo of Cuba.

Mauro Hueb, director of Odebrecht’s operations in Cuba, said he expects a spike in foreign investment as a result of improved expectations.

“We believe that (the embargo) will be lifted in the short to medium term,” he told Reuters in an interview on Friday. “The Cubans always had expectations the blockade would be lifted and Mariel of course was a project looking toward the future.”

Odebrecht also has hotel and sugar interests in Cuba, plans to build a plastics factory at Mariel, and is expanding Terminal 3 of Havana’s international airport, making the company an obvious advocate for Cuba.

Many potential foreign investors are more skeptical of doing business in the communist-ruled island, concerned about the safety of investments in a country that has shown a willingness to take over businesses it finds attractive or to jail foreign executives.

At Mariel, Odebrecht built 700 meters of port connecting to roads and rails in an initial phase that is expected to last eight to 10 years before expansion. With enough demand, Cuba could triple the waterfront infrastructure to 2,140 meters.

Hueb said that expansion might be needed sooner, though he did not predict exactly how soon. The embargo bans commercial vessels from U.S. ports for six months after they dock in Cuba.

“There could be an acceleration of the master plan for Mariel with the possible lifting of the embargo,” Hueb said.

In the initial phase, Mariel has the capacity to handle 1 million containers a year and so far has reached 30 to 40 percent of that, Hueb said.

A year after Cuba declared the Mariel zone open for business, no foreign company has signed a deal. Odebrecht’s plastics factory was once expected to receive the Cuban government’s approval in the second half of 2014 but it has since been delayed to some time in 2015.