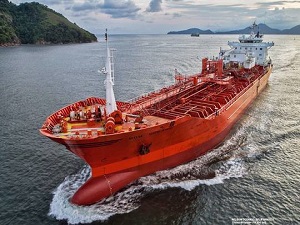 The chemical tanker market remained challenging in the third quarter of this year, however, it stabilized quarter-on-quarter, according to Norwegian shipping and tank terminal company Odfjell SE.

“The chemical tanker market remained depressed during the quarter, but we continue to believe that 2018 is the turning point for the chemical tanker markets,” Kristian Mørch, CEO Odfjell SE, said. General demand and COA nominations remained high during the quarter but the spot rates continued to soften slightly due to the continued supply pressure from “swing tonnage” from other tanker segments, mainly product tankers.

The global core chemical tanker orderbook stands at 8% of the current fleet. The global deep-sea fleet based on vessels larger than 18,000 dwt grew by 9 vessels in 3Q as 11 vessels were delivered, and 2 vessels were scrapped. Two new orders of 19,000 dwt chemical tankers were concluded during the quarter, the company said.

Overall, Odfjell SE  posted a net loss of USD 31 million compared to USD 120 million in the last quarter, which was impacted due to one-off costs related to the sale of the Rotterdam terminal. The loss was widened year-on-year as in Q3, Odfjell booked a net loss of USD 10.5 million.

“Adjusting for the Rotterdam terminal, our terminal division delivered stable results. We have positioned ourselves well for the future, both within tankers and terminals, with one of the most energy efficient fleets in the world,” Mørch added.

During the quarter the company took delivery of the first vessel from Sinochem on a bareboat contract. The remaining three vessels from Sinochem will be delivered during the fourth quarter of 2018. The company said that another four vessels owned by Sinochem will enter into the pool operated by Odfjell, where Odfjell will receive a management fee plus profit splits.

In October, Odfjell took delivery of one newbuilding Bow Precision on long-term TC from Shin-Kurushima shipyard and does not have any further newbuilding deliveries in 2018. The company’s tank terminal business delivered an EBITDA of USD 3.9 mill in the third quarter of 2018 versus USD 8.9 mill in the previous quarter.

“The decrease was impacted by the fuel oil spill in the Rotterdam harbor, interrupting storage and distillation business due to the closure of the port. The sale of the Rotterdam terminal also led to fewer days of income contribution for the terminal. The result was also impacted by higher G&A related to the restructuring of the Odfjell Terminals organization,” the company said, adding that it expects Odfjell Terminals results to improve in the final quarter of the year.