Odfjell to Sell Terminal in Rotterdam 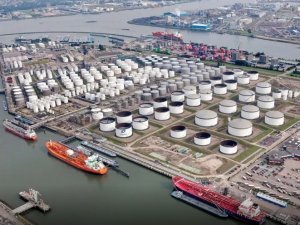 Odfjell has announced that OTBV intends to enter into an agreement with Koole Terminals B.V. of the Netherlands (Koole) to sell its 100% ownership of OTR and OTM for a total cash consideration of USD 155 million net of estimated transaction costs.

Odfjell has announced that OTBV intends to enter into an agreement with Koole Terminals B.V. of the Netherlands (Koole) to sell its 100% ownership of OTR and OTM for a total cash consideration of USD 155 million net of estimated transaction costs.

Further, Koole will compensate OTBV for all permitted equity injections made in 2018 until closing. The intended transaction would at closing reduce Odfjell Terminals net debt with around USD 35 million.

Odfjell SE’s share of the proceeds at closing is expected to amount to around USD 100 million and result in an estimated book loss for Odfjell SE of around USD 100 million. Any sale will be subject to the employee consultation procedures being finalized, finalising documentation and to customary regulatory approvals. LG’s exit process for the remaining shareholding in OTBV is still ongoing.

“This is a landmark transaction for us. We have been working hard to restore profitability at OTR during the past years, and the terminal is now ready for the next step of development, which will require significant investments. We are therefore pleased to have Koole as the potential purchaser. Koole has great ambitions for the terminal, and we are confident in their ability to realize the value potential this business represents. Following a sale of OTR, Odfjell will have a network of seven tank terminals worldwide. We remain committed to our tank terminals business and will allocate capital for growth of Odfjell Terminals in the years to come,” Kristian Mørch, CEO, Odfjell SE.

“OTR is well positioned to continue with building a successful future on the fundaments of its strategic location in the Port of Rotterdam, its unique capabilities, its top quartile safety performance and its strong organization. On behalf of Odfjell Terminals, I pay tribute to all the stakeholders of OTR for their continuous support. Odfjell Terminals remains focused on providing best in class safety and service performance to our respected customers across our terminal network,” Frank Erkelens, CEO, Odfjell Terminals.

This news is a total 890 time has been read
Tags: Odfjell to Sell Terminal in Rotterdam