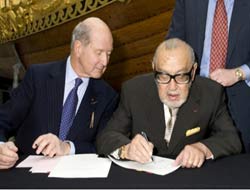 ISRAELI shipping billionaire Sammy Ofer wrote himself into the record books of philanthropy yesterday as he made what is believed to be the largest single donation to a UK cultural institution with a £20m ($45m) gift to expand the world-renowned National Maritime Museum in Greenwich.

The bequest will help fund a major £35m development programme that includes the construction of a new wing to be opened in time for the museum"s 75th anniversary and London Olympics in 2012.

After yesterday"s signing ceremony at the museum, Mr Ofer, who closely guards his privacy, said: ?I look forward to helping this hugely exciting project and believe it will be a great step forward for the museum.?
Museum staff were told of the donation and development plans last night, with a formal announcement expected this morning.

Prime Minister Gordon Brown offered his personal appreciation of the historic gift. He said: ?Our maritime story is Britain"s national story. This generous donation by Mr Ofer will help ensure that current and future generations understand better the crucial role played by the sea in our history and the lives of those who depended upon it.

?I applaud this opportunity to promote engagement with our maritime past, present and future, which has only been made possible by this unique gift to the nation.?

The museum"s development plans centre on the construction of a new Sammy Ofer Wing to the southwest of the current main building able to host major international exhibitions, as well as with new access to the museum"s huge archives, restaurant and shop, all opening onto Greenwich Park.

Mr Ofer"s donation was secured through his long-time business friend Lord Sterling, the former P&O boss who is now chairman of the museum"s trustees.

Lord Sterling said: ?I would like to extend our deepest thanks to Sammy Ofer for his extraordinary generosity. Sammy is a man who has been key to the global maritime industry for many years and who, through his close relations with the London shipping community and the City of London, has formed an admiration and respect for the long maritime history of the country.

?We are profoundly indebted to him for making such a farsighted donation of his personal wealth and in expressing such confidence in the future of the world"s foremost maritime museum.?

Mr Ofer, who is based in Monaco but has homes in London, Tel Aviv and elsewhere, heads a huge private family-owned shipping, industrial and finance group, including Tanker Pacific in Singapore and Zodiac Maritime Agencies in London, which now ranks as the largest operator of UK registered vessels.

Museum director Kevin Fewster was delighted at the donation. ?It will create a spectacular contemporary environment in which more people can appreciate the wonders of our world-class collections and their stories of human endeavour and discovery.

?This groundbreaking scheme will undoubtedly increase the number of visitors we reach with our programmes and collections, both at Greenwich and through our digital resources.?

Greenwich will again be the centre of attention today with a visit by French President Nicolas Sarkozy to the Royal Observatory as part of his state visit.

This news is a total 2135 time has been read