Offers below $40m so far 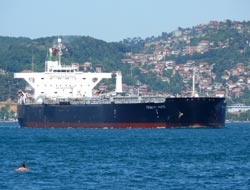 Afframax "Trident Hope" is struggling to see offers over $40 million.

Afframax "Trident Hope" is struggling to see offers over $40 million.

Japanese ship operator Nissen Kaiun Kaisha's attempts to sell-off the only operational oil tanker in its fleet have exposed how badly the downturn has hit ship values.

It is reported in early January that Nissen Kaiun was looking for buyers for its five-year old Japanese-built 106,000 dwt aframax Trident Hope.

Latest indications from one broker indicate that the Trident Hope is ?struggling to see offers over $40 million.?

According to Galbraith, this is close to half of its estimated value of $70 million just two months ago.

It was also pointed out that a $40 million sale price for the Trident Hope would be 21% below the current Baltic assessment price value.

Gibson indicated that initial offers for the Trident Hope were in the mid-$30 million, and only second offers elicited the $40 million bid, reports said.

Many players are now apparently concerned the Trident Hope sale will set ?a worrying new benchmark.?

?It is hardly surprising that many people are struggling to comprehend how a double hull tanker can change in value by so much over such a very short space of time,? said Galbraith in a recent report.

?It has created enormous uncertainty in sale and purchase values. The current gap between what a buyer is prepared pay and the price a seller will accept is huge.?

Nissen Kaiun's attempt to sell-off the Trident Hope came amid separate reports that fellow Japanese operator K Line has acquired a VLCC newbuilding with similar specifications from the yard where Nissen Kaiun has two orders under construction.

Kawasaki Kisen Kaisha (K Line) Co. Ltd. is reportedly paying $110 million for the VLCC which is still being built at present at the Imabari Shipbuilding yard in Saijo, Japan.

Delivery was scheduled in June for the original owners whose identities have not been officially confirmed.

Sources are speculating that the original owner is Nissen Kaiun.

The $110 million price tag ?is a drastic drop from just a few months ago-values,? brokers tell, ?considering it is from a Japanese yard.?

One said that VLCC newbuilding values have currently plunged as much as 40% from the average price tag of around $160 million last August.

?That would translate into something of a sell-off for Nissen Kaiun, perhaps a sign of trouble brewing, although tankers are generally still a 'safer bet' currently than other sectors,? said one source.

Nissen Kaiun presently runs a fleet of 39 vessels consisting primarily of box and reefer ships and bulk carriers, according to data from Clarkson.

This news is a total 1059 time has been read