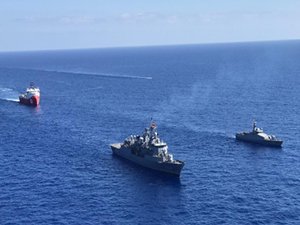 Their dispute over the discovery of gas deposits in waters off the shores of Crete and Cyprus have brought them to the brink. Unless they step back in favor of a compromise, the dispute is set to escalate towards a major conflict.

COVID-19 has not deterred regional actors and major powers from maintaining, and in some cases enhancing, their geostrategic competitions in many hotspots around the globe. An emerging flashpoint is that between two old rivals, Turkey and Greece, in the eastern Mediterranean. Their dispute over the discovery of gas deposits in waters off the shores of Crete and Cyprus have brought them to the brink. Unless they step back in favor of a compromise, the dispute is set to escalate towards a major conflict.

The Turkish and Greek conflicting claims over the gas deposits is new, but their mutual antagonism has its roots deep in history. In modern times, the protagonists fought a month-long war over Cyprus in July 1974 when Turkey launched an invasion of the island in support of its Turkish minority. Turkey’s victory and creation of the Turkish Republic of Northern Cyprus over some 36 percent of the island’s territory divided the island, and seriously jeopardized the chances of good neighborly relations between the two rivals. Northern Cyprus is only recognized, and largely maintained and secured, by Turkey.

Persistent United Nations mediation for a resolution has failed to produce any satisfactory results. Although both Greece and Turkey are NATO members, this has not enabled any bridge of reconciliation between them. Nor have the European Union’s efforts in this respect.

In fact, Turkey’s strongman and Islamist President Recep Tayyip Erdogan has grown disillusioned with the EU during the political ascendancy of his Justice and Development Party (AK) since 2002, for three important reasons. One is the EU’s rebuffing of Turkey’s longstanding desire to join the organization, which has been partly at the behest of EU members Greece and Cyprus. Another is the Syrian refugee crisis. Turkey has shouldered the main burden, but the EU has wanted it to hold back the outflow of Syrian refugees into Europe, albeit in return for what Ankara has claimed to be inadequate EU financial assistance.

While keeping Turkey’s membership of NATO, Erdogan has incrementally found it expedient to reorient Turkish foreign policy to the extent possible towards Russia, Iran and China, despite his differences with them in Syria, and to enlarge his country’s strategic role in the Mediterranean and the Middle East. He backed Qatar over its blockade by Saudi Arabia, the United Arab Emirates, Bahrain and Egypt, and supported the UN-recognized government in Libya against the forces of the renegade General Khalifa Haftar, who is backed by Egypt and its Arab allies.

He has also shown sympathy for the outlawed Muslim Brotherhood in Egypt and the Gulf Arab states, and critically downgraded relations with Israel in favor of strengthening the Palestinian cause. Along with this reorientation, Erdogan has sought to beef up his Islamist credentials. One of his latest moves was the conversion of the Hagia Sofia museum into a mosque to the chagrin of Christian sources in the West.

The prospects of the discovery of large gas deposits have once again revived the potentially very dangerous antipathy between the two Mediterranean states. Both sides have conducted military exercises, with French participation in the Greek venture, and U.S. involvement in Turkey’s.

Meanwhile, Greece has reached an agreement with Egypt and Libya to extend its maritime boundaries so it can lay claims over the Aegean Sea and the eastern Mediterranean. Ankara has decried the agreement as illegal, claiming that it overlaps with a continental shelf deal that Turkey signed with the Libyan government in 2019.

Turkey’s activities in the Middle East and North Africa have rattled the Egyptian autocratic President Abdel Fattah al-Sisi and strengthened a regional Arab perception that Ankara wants to claim leadership of the Muslim world and revive the old Ottoman imperial ambitions.

The U.S. and the EU have called on the two protagonists to restrain from any escalation. But Erdogan distrusts both, and seems determined to have different foreign policy options to suit his internal and external purposes. He has now steered Turkey sufficiently away from a firm alliance with the West and its regional allies to play his pro-Eastern cards, involving good relations with Russia, Iran and China, to stand tall at home and in the region.

Yet, the danger of another Turkish–Greek conflict, with wider implications for stability in the Mediterranean and beyond, cannot be underestimated. The EU has inclined to side with Greece in the current dispute, but it is imperative for the organization to join forces with the UN and major powers to bring about a mediated settlement. The current troubled world cannot afford another potentially devastating conflict.

This news is a total 2528 time has been read
Tags: Offshore Gas Deposits Rekindle Old Contest Between Turkey and Greece