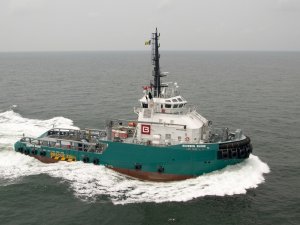 The 14 seafarers onboard had reported water ingress as the vessel came into the path of major hurricane Lorenzo on 26 September, prompting an emergency mission by French Navy and commercial ships over the weekend. Thus far, three of the crew have been reported rescued and search efforts continue for 11 missing sailors.

At 1,200 nautical miles off Martinique island and 970 nautical miles due west of Cape Verde, water began inundating the offshore tug’s aft section, when the tug was within miles of the hurricane’s eye wall.

Bourbon’s crisis cell is working with the Regional Operational Center of Surveillance and Rescue (CROSS) in West Indies-Guyana and French Navy in the search for missing crew members.

CROSS and the French Navy, under the authority of the French national maritime authority, are co-ordinating operations and have called on merchant ships for assistance.

"Five commercial vessels have changed course in order to bring assistance to the rescue teams," according to Bourbon.

A Falcon 50 of the French Navy and aircraft of the American National Hurricane Center (NHC) conducted numerous overflights of the search area over the weekend.

Bourbon confirmed the three crew members who were rescued by a lifeboat received medical assistance on a commercial ship attending the site of the emergency.