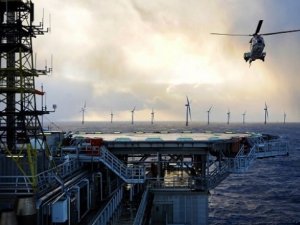 Equinor and its partners have decided to explore the possibilities of supplying the Gullfaks and Snorre fields on the Norwegian Continental Shelf with power from floating offshore wind.

This could be the first time an offshore wind farm is directly connected to oil and gas platforms.

The aim of the project is to reduce the use of gas turbines by supplying the platforms with wind power. The project forecasts a reduction of CO2 emissions by more than 200,000 tons per year, equivalent to the emissions from 100,000 cars.

The solution calls for a wind farm consisting of 11 wind turbines based on Equinor’s floating offshore wind concept, Hywind. The 8MW turbines will have a combined capacity of 88MW and are estimated to meet about 35 percent of the annual power demand of the five Snorre A and B, and Gullfaks A, B and C platforms. In periods of higher wind speed this percentage will be significantly higher.

The project is expected to cost about NOK 5 billion, and the industry’s NOx fund may provide up to 566 million NOK in investment support for the project. In addition, Equinor will request funding from the Norwegian authorities' Enova program for innovative offshore wind projects associated with the oil and gas industry.

An investment decision is expected in 2019.

Equinor intends to invest up to one fifth of its capex on alternative energy sources within 12 years. Current and prospective wind projects include Hywind Scotland, the world's first floating commercial wind farm and the proposed Empire Wind off Long Island, which would provide about 1GW of power for New York.

This news is a total 329 time has been read
Tags: Offshore Wind Farm Could Power Snorre and Gullfaks Platforms