Oil down after 'bloodbath' 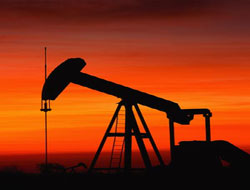 Brent North Sea crude sank below the 80-dollar mark for the first time in about a year.

Dealers said economic fears outweighed news that the Organisation of the Petroleum Exporting Countries (OPEC) will hold an emergency meeting next month to discuss the global crisis and its impact on energy demand.

In afternoon trade New York's main contract, light sweet crude for delivery in November, plunged 4.08 dollars to 82.51 dollars after dropping 2.36 dollars to 86.59 on Thursday at the New York Mercantile Exchange.

Brent North Sea crude for November delivery fell 3.58 dollars to 79.08 dollars after settling 1.70 dollars lower at 82.66 on Thursday in London. The contract first rose through the 80-dollar level in late September 2007.

"In stock markets around the region we are really having a bloodbath and, correspondingly, oil spirals (down) along with it," said Victor Shum, of international energy consultancy Purvin and Gertz in Singapore.

The Tokyo bourse suffered its biggest loss in more than two decades. Some other markets fell about seven or eight percent over fears that authorities are unable to contain the global financial crisis.

The oil market has "a growing sense of inevitability" that the world is entering an extended economic slowdown which would hurt demand for energy, Shum said.

OPEC said it would hold an emergency meeting in Vienna on November 18 to discuss "the global financial crisis, the world economic situation and the impacts on the oil market."

"The organisation is concerned about the deteriorating economic conditions," said a statement from OPEC, whose 12 member nations pump around 40 percent of world oil supplies.

OPEC reiterated its determination "to ensure that oil market fundamentals are kept in balance and market stability is maintained." Some oil analysts said that if prices continue to fall OPEC could slash output.

"Market participants are still very much concerned that demand will continue to dwindle as global economies continue to slow sharply," said Sucden analyst Nimit Khamar in London. He said there were "increased expectations" that OPEC may reduce output.

But Shum said a production cut would be very badly received by the international community as the world heads into an economic slump.

"I think the moderate members, in particular the Saudis, will not agree to any form of production cut," Shum said, referring to OPEC's largest member Saudi Arabia. "They might quietly tweak output."

The Department of Energy said US crude oil inventories had risen by 8.1 million barrels in the week ended October 3, far more than market expectations of a 2.3-million-barrel gain.