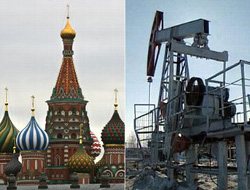 Russia plans to influence world oil prices, including by revising its output forecasts, the Russian energy minister said on Thursday.

Russia plans to influence world oil prices, including by revising its output forecasts, the Russian energy minister said on Thursday.

"Russia needs to take an active position on influencing the current market price of oil. There needs to be a Russian factor," Sergei Shmatko said.

"We keep talking about OPEC ... but we believe that we occupy such a high place in the world's oil community that Russia should emerge as an active factor." When asked about whether oil forecast reviews would be up or down, Shmatko said "either way."

"We believe we should deal more actively with the markets. Technologically, we have no possibility of simply turning off the tap. We can't simply shut down oil fields and then open them up again at any time. To my mind, we can give our opinion from the viewpoint of forecasts, Shmatko said.

According to Shmatko, special attention should be given to the idea of reserving new oil fields to keep them untouched while retaining the option of opening them within a clearly defined time frame.

Russia's daily oil output stands at around 10 million barrels, or about 12% of global production, close to the level of leading producer Saudi Arabia.

This news is a total 709 time has been read