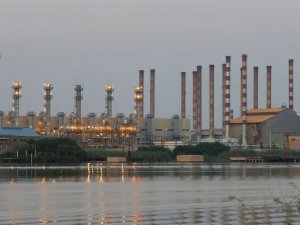 There has been a common fallacy for a while that, thanks to the US shale revolution, the world has plenty of oil.

In fact, the balance between supply and demand is a lot tighter than assumed, which is why the crude price has jumped sharply after America's assassination of a top Iranian military commander.

Those attacks, which temporarily forced the Kingdom to close down half of its oil production, were blamed at the time on Iran and there is an expectation that Tehran will retaliate to the killing of Qassem Soleimani.

The feeling in oil markets is that Iran, which denied responsibility for the attacks last September, certainly has the ability to hit back.

Amrita Sen, of the consultancy Energy Aspects, said one question was the speed at which Iran might retaliate.

She told Sky News's sister channel CNBC: "The market reaction was a kneejerk reaction because the question is how quickly Iran will retaliate.

"If you don't see anything immediate from Iran, you might see the price give up its gains."

Jeffrey Halley, senior market analyst for Asia Pacific at broker OANDA, added: "I am struggling to see how an Iranian riposte will not occur. Oil installations and tankers were my first thoughts."

The big question being asked is where any Iranian retaliation may take place.

Saudi Arabia has been on a state of high alert since the attacks last September, meaning that Iran may find it easier to attack potentially softer targets, such as Dubai or Abu Dhabi.

This would also have the benefit, as Iran would see it, of wreaking havoc in energy markets as well as potentially striking at cities full of Western expatriates.

However, Ms Sen said Iran could seek to hit targets in neighbouring Iraq as part of its response, which would also have a big impact.

She went on: "Iraq is now exporting 3.5 million barrels per day. I think that is the biggest risk for the market right now."

Among members of Opec, the cartel of oil-producing countries, Iraq's oil production is now second only to Saudi Arabia itself.

It has been reported on Friday that dozens of Americans working for foreign oil companies in Basra, the southern city that sits at the heart of Iraq's oil production and from where most Iraqi crude is exported, were preparing to leave.

It is also thought likely that Iran, whose own oil exports have been crippled by US sanctions, will also step up its harassment of commercial shipping and oil tankers in the Strait of Hormuz, one of the world's most important shipping routes, through which around a fifth of the world's oil passes.

Iran seized a British-flagged tanker, the Stena Impero, in July last year and detained it for two months. Tehran's move on that occasion was in retaliation for the detention in Gibraltar, by Britain's Royal Marines, of an Iranian tanker bound for Syria in defiance of EU sanctions.

All this comes at a time when many economists were starting to reappraise the prospects for higher oil prices in 2020.

The apparent thaw in relations between China and the US has raised hopes that a trade deal between the two countries is imminent.

That would provide a boost to China, which alone consumes just over a fifth of global oil exports.

Hopes of a strong economic performance from China this year have already been boosted by news of a pick-up in business confidence and in new factory orders while, earlier this week, the People's Bank of China also announced fresh stimulus measures to encourage banks to step up their lending. All of that will have been seen as positive for the oil price.

A stronger crude price, though, also spells trouble for countries like Germany, India and Japan which depend heavily on imports of oil and gas.

Germany's economy narrowly avoided falling into recession during the second half of last year and higher oil prices over a prolonged period of time would spell trouble for the world's fourth-largest economy. Accordingly, as concerns of an escalation in the Gulf and the wider Middle East sparked falls in other markets, the DAX in Germany was the heaviest faller among European stock markets.

With all of the main European stock markets lower on the news, the DAX fell by nearly 1.5%, while the MIB in Italy was down by 1% and the CAC 40 in France fell by 0.5%.

Ironically, the FTSE 100 has fallen by less than the other major European stock indices, because of the heavy weighting in the index of the oil majors BP and Royal Dutch Shell - both of which have risen on the back of higher crude prices.

Predictably, shares of airlines have fallen, with shares of easyJet, Ryanair and International Airlines Group, the owner of British Airways, all falling by between 2% to 3% on Friday.

Elsewhere, shares of Lufthansa fell by more than 7% in Germany, while shares of Air France-KLM fell by almost as much.

Meanwhile, on the foreign exchange markets, safe haven currencies like the Japanese yen and the Swiss franc have risen following the attacks.

The yen rose by 0.5% against the US dollar to hit its highest level against the greenback for more than two months.

On the bond markets, US and German government bonds both attracted buying, while gold, another safe haven, rose by nearly 1.5% to as much as $1,550.10 an ounce, its highest level since September last year.

Overall, the question investors have to ask themselves is whether Iran is capable of striking back quickly after these attacks and, more pertinently, whether it is capable of hitting key economic targets, rather than just causing low-level temporary disruption to oil supplies.

This news is a total 1608 time has been read
Tags: Oil price, US-Iran conflict