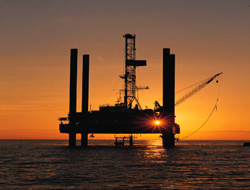 Oil prices dipped below $75 a barrel Wednesday, a new 13-month low, as OPEC reduced its 2009 petroleum demand forecast amid signs that the global economy is headed for a severe downturn.

Oil prices dipped below $75 a barrel Wednesday, a new 13-month low, as OPEC reduced its 2009 petroleum demand forecast amid signs that the global economy is headed for a severe downturn.

Light, sweet crude for November delivery fell $3.73 to $74.90 a barrel on the New York Mercantile Exchange after earlier sliding to $74.57, the lowest trading level since Sept. 5. Oil prices have now plummeted 49 percent since peaking at $147.27 on July 11.

The stunning collapse has sent pump prices tumbling. A gallon of regular gas fell nearly 4 cents overnight to a new national average of $3.125, according to auto club AAA, the Oil Price Information Service and Wright Express. That left prices nearly 10 percent lower from where they were only a week ago and almost 25 percent down from their all-time high of $4.114 set July 17.

The Organization of the Petroleum Exporting Countries said rich nations in 2009 are expected to need only 400,000 barrels a day more oil than this year, whereas demand from developing countries will increase by an estimated 1.1 million barrels, with most of that growth coming from China, the Middle East and India.

OPEC's report comes about a month before the cartel is scheduled to hold a special meeting to discuss ways to deal with oil's slide, including the possibility of tightening output. OPEC controls 40 percent of the world's oil supply, though analysts say a cutback in OPEC production likely would not dramatically alter crude's downward direction.

A global economic slowdown caused by a seize-up in world credit markets is forcing consumers and businesses around the world to cut back on energy use. U.S. and European leaders this week announced plans to pump billions of dollars into the beleaguered banking system to jump start lending, though experts say the damage to the wider economy has already been done.

Jim Ritterbusch, president of energy consultancy Ritterbusch and Associates in Galena, Ill, said oil traders were "undoubtedly" pricing a recession into the market.

"It's just a question of severity," Ritterbusch said. "And given the downward movement in oil, it's beginning to look like a more severe recession than a lot of people had expected."

The OPEC report reflected the extent of the downturn in developing countries while showing that appetite for crude remained robust elsewhere.

While total oil consumption dropped in developed countries by more than 1 million barrels a day as of September over a 12 month period, demand growth from developing countries increased by a daily 1.2 million barrels over the same time, OPEC said.

The U.S. plans to spend as much as $250 billion this year of a $700 billion bailout buying stock in private banks. Governments across the globe have pledged more than $3 trillion to prop up ailing banks in a bid to stabilize a credit crisis that began last year in the U.S. sub-prime mortgage market.

Worries about a recession are strengthening expectations that crude prices still have some way to go before they bottom out. Trader and analyst Stephen Schork suggested that $50 "is now within the realm of possibilities."

Investors are also watching for signs of slowing U.S. demand in the weekly oil inventories report to be released Thursday from the U.S. Energy Department's Energy Information Administration, a day later than usual because of the Columbus Day holiday. The petroleum supply report was expected to show that oil stocks rose 3.1 million barrels last week, according to the average of analysts' estimates in a survey by energy information provider Platts.

Crude stocks have grown as oil installations in the Gulf of Mexico began operating again after being shut down by Hurricane Ike last month.

"There is some demand destruction in that forecast, but there's also hangover from the hurricane as refineries come back on line," said Gerard Rigby, an energy analyst at Fuel First Consulting in Sydney.

This news is a total 809 time has been read