Oil prices up as Saudis struggle with rapid recovery 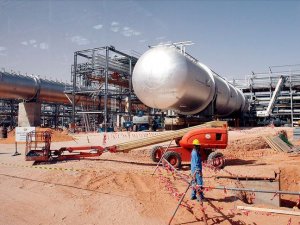 Oil prices were up to open Tuesday as the oil market has focused on how fast Saudi Arabia can restore production in the aftermath of drone attacks, but the kingdom is struggling with a rapid recovery in its output.

Drone attacks on two major oil facilities in Saudi Arabia on Saturday knocked out 5.7 million barrels per day (mbpd) of oil production -- more than half of the kingdom's oil output of 9.7 mbpd.

Although Saudi officials said Sunday 2 mbpd of the disruption could be restored as early as Monday, later news reports showed that officials are now looking at months, instead of weeks, for a full recovery in production.

U.S. President Donald Trump offered late Sunday that his country could release some of the strategic petroleum reserves in order to mitigate the loss of supply in the global oil market, which would prevent prices to climb further.