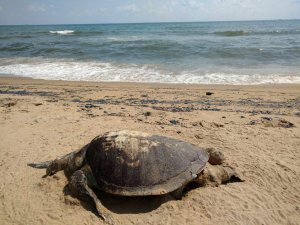 The collision between LPG tanker BW Mapple and the product tanker Dawn Kanchipuram at Bay of Bengal caused oil spill, which spread to Chennai’s shoreline down to the Marina Beach.

The local fishermen and citizens noticed the terrible environment pollution, as the beach was covered with thick black oil, as well as a number of turtles washed ashore dead. The collision caused damage of the product tanker and according to the local authorities only several tons of oil spilled into the water, but judging from the photos released by Coast Guard the spill and environmental pollution is much larger. According to preliminary information, the spill was restricted by oil booms, but obviously the preventive actions were not accurate.

While the Coast Guard was carrying out the operations to remove the oil, on Sunday morning it had spread further down till Marina Beach. Already on Sunday many citizens reported that large quantity of thick and dark oil was washed ashore near Ernavur.

The environmental experts said the spill could have a long lasting impact on marine life, even to the extent of causing irreparable damage. The fisherfolk were already complaining on Sunday about finding a lot of dead fish in the sea and being unable to go fishing but the situation turned grave on Monday.

Earlier the Coast Guard and the TNPCB officials had expressed hope that the spill could be contained by Monday, the thick black oil now seems to have spread further.

The LPG tanker BW Mapple collided with product tanker Dawn Kanchipuram at Bay of Bengal near Kamaraiar Port in Chennai, India. The collision caused damages of the product tanker, which suffered breaches in the portside board and spilled undefined quantity of oil into the waters off Chennai.

This news is a total 892 time has been read
Tags: Oil spill after collision between LPG and product tanker spread to Chennai’s shoreline