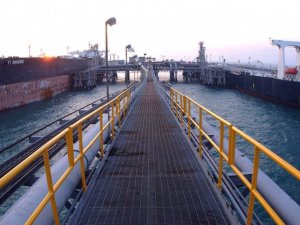 An oil spill has caused shipping operations to be halted at three docks of Venezuela’s main crude exporting port, according to Reuters.

The spill happened at a terminal run by state oil firm PDVSA at Jose port on the northeast coast near the city of Barcelona.

It occurred at Jose’s Eastern dock during the loading of the Very Large Crude Carrier (VLCC) Nave Quasar, which was chartered by Indian firm Reliance Industries.

Workers of PDVSA (proper name Petroleos de Venezuela SA) are conducting clean-up to the dock and the vessel. The quantity of crude involved has not been revealed.

This news is a total 1301 time has been read
Tags: Oil spill halts shipping at PDVSA’s terminal in Jose