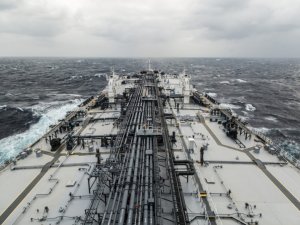 Oil ended nearly 15% higher on Monday, with Brent logging its biggest jump in over 30 years and a record trading volumes, after an attack on Saudi Arabian

attack on Saudi Arabian crude facilities cut the kingdom’s production in half and intensified concerns of retaliation in the Middle East.

“The attack on Saudi oil infrastructure came as a shock and a surprise to a market that had not been trading volatility and was more focused on the demand aspect over supply,” said Tony Headrick, an energy market analyst at St. Paul, Minnesota commodity brokerage CHS Hedging LLC.

“I think the tables abruptly shifted in the way of the supply outlook and that caught many that were short off guard and encouraged new length to be put in place,” Headrick said.

The Chicago Board Options Exchange’s Crude Oil Volatility Index, a gauge of options premiums based on moves in the U.S. oil exchange traded fund, rose to 77.17, its highest level since December last year.

Saudi Arabia is the world’s biggest oil exporter and, with its comparatively large spare capacity, has been the supplier of last resort for decades.

The attack on state-owned producer Saudi Aramco’s crude-processing facilities at Abqaiq and Khurais cut output by 5.7 million barrels per day and threw into question its ability to maintain oil exports. The company has not given a specific timeline for the resumption of full output.

Prices surged about 20% after the open on Sunday evening, with Brent crude posting its biggest intraday gain since the 1990-1991 Gulf crisis, before pulling back as various nations said they would tap emergency supplies to keep the world supplied with oil.

Oil futures climbed higher during the session after the Saudi-led military coalition battling Yemen’s Houthi movement said the attack was carried out with Iranian weapons, raising the prospect of a global conflict involving the United States and Iran.

Trump also said Washington was “locked and loaded” to hit to respond to the strike, and the threat of retaliation and an escalation of tensions in the Middle East may keep prices elevated, regardless of any relief from global stockpiles.

U.S. Ambassador to the United Nations Kelly Craft told the Security Council that emerging information on attacks on the Saudi oil facilities “indicates that responsibility lies with Iran” and that there is no evidence the attack came from Yemen.

Britain’s U.N. Ambassador Karen Pierce told the council: “We’re still assessing what happened and who’s responsible for the attacks. Once this has been established, we will discuss with our partners how to proceed in a responsible manner.”

Russia and China urged against hasty conclusions over the attacks.

Saudi oil exports will continue as normal this week as the kingdom taps into stocks from its large storage facilities, an industry source briefed on the developments told Reuters, but the attack raises concerns about how long the kingdom will be able to maintain oil shipments.

Major importers of Saudi crude, such as India, China, Japan and South Korea, will be the most vulnerable to any supply disruption. South Korea has already said it would consider releasing oil from its strategic reserves.

Saudi Arabia is set to become a significant buyer of refined products after the attacks, which may have also cut Aramco’s refining capacity, consultancy Energy Aspects said.

This news is a total 1523 time has been read
Tags: aramco, Drone attacks , Aramco oil facilities