Oil Tanker Missing Since Friday in Gulf of Guinea 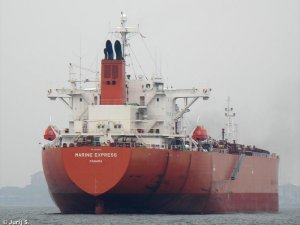 An oil products tanker with 22 Indian crew members has been missing since Friday in the Gulf of Guinea, the manager of the vessel has confirmed, sparking fears that the vessel has been hijacked.

Hong Kong-based Anglo-Eastern confirmed in a tweet that they have lost contact with their managed MT Marine Express while in Cotonou, Benin. Last contact was made with the vessel

We regret that contact has been lost with the AE-managed MT Marine Express while at Cotonou, Benin. Last contact was at 03:30 UTC, Feb 1. Authorities have been alerted and are responding. Our top priority is the safety of the crew, whose families have been contacted. Updates TBA.

The 180-meter MT Marine Express is registered in Panama. The vessel was built in 2009.

AIS tracking data shows the vessel was last at an anchorage off Cotonou, Benin on Friday.

This news is a total 719 time has been read
Tags: Oil Tanker Missing Since Friday in Gulf of Guinea