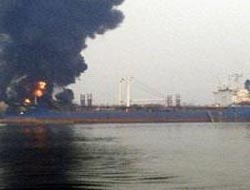 It wasn't known what caused the truck's cargo to catch fire as it traveled on a road along the outskirts of Port Harcourt, but up to three dozen people were feared killed in the blaze, said a Rivers State police spokeswoman, Ireju Barasua. Police were investigating first reports of the fire and had no firm casualty toll, she cautioned. It wasn't known if the blaze was linked to the region's militants, who have promised to step up their campaign of bombings and kidnappings.

The tanker was berthed in a general cargo area, not at an oil exporting terminal, and crude exports from the world's eighth largest oil exporter were not affected, the sources said.

"At 6.40am there were two loud bangs and all of a sudden an oil tanker caught fire," said a security consultant for a major oil company in Nigeria, who asked not to be named.

"It is still burning," the source said.

Militant violence around Port Harcourt has been rising in recent weeks after the collapse of peace talks with the government.

The militants, who have vowed to halt oil exports, are demanding greater regional control in the country's main oil-producing area.

This news is a total 631 time has been read