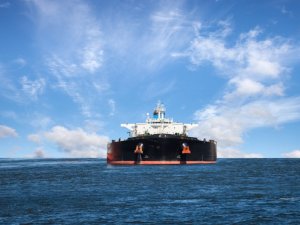 Oil companies booked tankers to store as many as 9 million barrels of crude in northwest Europe amid signs that space in on-land depots is filling up, a ship-operator said. The glut could get bigger still, given the region is scheduled to load the most

There are 14 to 16 Aframax-class tankers now storing crude in the region, Jonathan Lee, chief executive officer of Tankers International, operator of the world’s biggest pool of supertankers, said by phone Friday. Standard cargoes are normally almost 600,000 barrels. Lack of on-land capacity to hold the oil is the most likely cause of the buildup, he said.

North Sea producers are among a long list of suppliers adding barrels just as OPEC prepares to try and eliminate a surplus. Pressure on the exporter club is piling up because its own members are pumping like never before while nations outside the group including Brazil, Kazakhstan, Canada and Russia are producing more than ever or pumping from new fields.

Traders began looking for profit at sea again earlier this month, according to a Bloomberg survey, with Tankers International saying at the time that between five and 10 ships had been chartered to hold oil near Singapore, most likely to profit from weak crude prices.

Those ships are the industry’s biggest supertankers, holding 2 million barrels a piece. The vessels in the North Sea would normally carry about 70 percent less oil.

Oversupply in the oil market has caused a key oil-price spread that denotes the scale of any surplus to balloon. The difference in the price of January and February Brent contracts rose to $1.18 a barrel this week, the widest since April 2015, excluding days when the price expires.

When the month-on-month discount gets deep enough — something called contango — it sometimes rewards traders to hire ships, keep hold of the oil, and sell it at the later price, because the gap more than covers the cost of booking a vessel. Other times, there just isn’t space to unload, forcing vessels to wait. Inventories in Amsterdam, Rotterdam and Antwerp are the highest for the time of year since at least 2013, according to data from Genscape Inc.

“The big question is whether it’s contango or whether it’s a lack of physical land-based storage” that’s caused the storage buildup in Northwest Europe, London-based Lee said. “It seems to be the latter at the moment.”

The Brent price spreads collapsed because supplies are being pushed onto the market that were previously unavailable.

Libya shipped the most oil since late 2014 in October, while Nigeria’s petroleum minister said the nation is now pumping more than 2 million barrels a day for the first time since the start of the year. That is in addition to new supply from Kazakhstan’s Kashagan oil field and Russian output at a post-Soviet record.

This news is a total 3182 time has been read
Tags: Oil Tankers Used to Store Millions of Barrels at Sea as Land Sites Fill