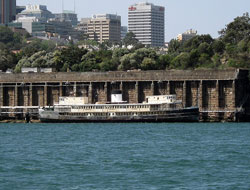 BARAGOOLA was launched on 14th February 1922.

Baragoola was listed in an Australian online auction at a starting price of nine dollars and no reserve.

The auction concluded with a winning bid of $25,009 made by a Port Stephen's man.

The 498 grt ferry was built in 1922 and last saw service in 1983. Originally a steamship, in 1960 she was converted to diesel electric propulsion.

She was one of a class of six steamers, ( the others being: BINGARRA, BURRA BRA, BELLUBERA, BALGOWLAH, BARRENJOEY) designed by Morts Dock and Engineering, initially under the guidance of former chief draughtsman Andrew Christie, and built at the Woolwich yard - except for BARAGOOLA which was built at Balmain.

According to the Heritage Branch listing they were among the largest ships built in Australia at the times "and on the admission of Mort's executives, were built by the Dock more for prestige than profit."

BARAGOOLA was launched on 14th February 1922 by the wife of the owning company's Chairman of directors, Mr. Hunter McPherson. She cost £80,000 which was at the time a significant cost compared to earlier ships of the class.

The identity of her new owner is being kept confidential, however it is reported that he wishes to put the ferry into active service again on dolphin-watch cruises.

This news is a total 1082 time has been read